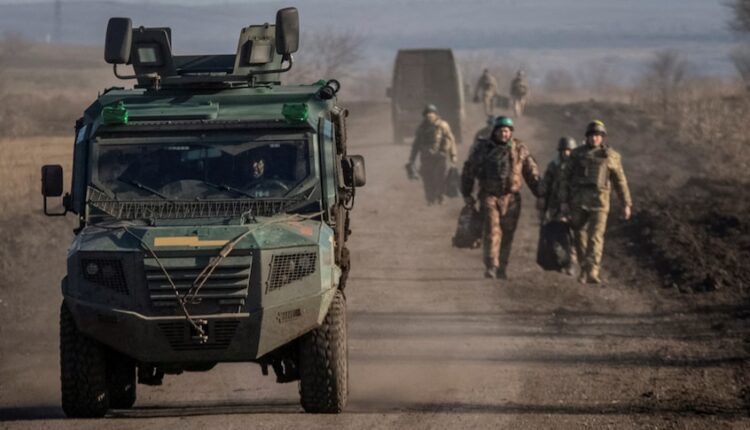 
Ukraine has conceded its forces have pulled back from Soledar, a town in the eastern Donetsk region where some of the fiercest battles of Russia’s nearly year-long invasion have been fought.

“For two or three days we lost positions but now we are working to push back to what we had before,” said Igor, part of the aerial reconnaissance unit involved in the attack.

Compared to the rest of the industrial Donetsk region — whose capture Russia has made its military priority — Soledar has seen some of “the worst fighting” over recent days, he said.

The fighting in eastern Ukraine has stood mostly at a stalemate for months.

Since its invasion of Ukraine, Moscow has prioritised taking full control of the Donbas, where it has backed a separatist insurgency since 2014.

Russia has seized most of Luhansk, but about half of Donetsk remains under Ukraine’s control.

Taking control of Soledar potentially allows Russian forces to cut supply lines to Ukrainian forces in the key town of Bakhmut, though the strength of Ukraine’s new defensive positions is not known.

Russia’s notorious mercenary group Wagner claimed to have spearheaded the offensive for Soledar, claiming its capture on January 11.

Two days later, Russia’s defence ministry announced Moscow’s forces controlled the salt-mining town, which had a pre-war population of around 10,000.

Moscow’s capture of Soledar was its first battlefield victory in months, and came on the back of a slew of humiliating defeats on eastern and southern fronts.

Some Ukrainian troops were holding the edges of the city, he said, and others were “building a defensive line, fortifying new points, while at the same time delivering a massive blow to the enemy”.

Fighting takes its toll on morale

Mr Cherevaty did not disclose when the pullback happened, but said it had been carefully planned.

There was no “mass capture” or “encirclement” of Ukrainian forces, he added.

The commander of Igor’s unit, a senior sergeant with the call sign “Alkor” said there had been “a strong battle on the front line”, with Ukrainian troops raining shells down on Russian forces.

But, he said, Kyiv’s troops were outnumbered.

“We shoot and shoot and shoot, but after five minutes another wave of 20 enemies is coming at us … their numbers are huge. They use people as cannon fodder.”

The good news, he said, was, “the Russians prevail only in number”.

While Ukrainian forces have struggled to maintain morale in the face of the intense fighting and setback, the onslaught of Russian aggression in Soledar has taken its toll.

And the grinding fight to prevent Russian forces from making even further gains is taking a toll, Mr Leonov added.

He told AFP that 27 servicemen had signed a letter saying they will no longer go to combat positions.

This comes as Ukrainian President Volodymyr Zelenskyy on Wednesday signed legislation toughening punishments for disobedience or desertion from the armed forces.

Soldiers could face up to 12 years in prison for desertion and up to 10 years for refusing to fight.

But for some people, prison is better than dying in the trenches in Donetsk.

At least, “some think so,” Mr Leonov said.

The United Nations’ cultural agency, UNESCO, said it had designated the historic centre of Odesa, a strategic port city on Ukraine’s Black Sea coast, a World Heritage in Danger site.

The status, awarded by a UNESCO panel meeting in Paris, is designed to help protect Odesa’s cultural heritage and enable access to financial and technical international aid.

Odesa has been bombed several times by Russia since its invasion of Ukraine.

In July 2022, part of the large glass roof and windows of Odesa’s Museum of Fine Arts, inaugurated in 1899, were destroyed.

In a statement, UNESCO director-general Audrey Azoulay said that Odesa, “free city, world city, legendary port” had made its mark on cinema, literature and the arts.

Ukrainian President Volodymyr Zelenskiy said the decision “will help us protect our Odesa … Russia is incapable of defending anything other than terror and strikes”.

Russia’s foreign ministry said it had no quarrel with the decision to celebrate and protect Odesa’s legacy.

“But this requires a clarification that the sole threat to the city’s rich history stems from Ukraine’s nationalist regime which systematically destroys monuments to the founders and defenders of Odesa,” it said in a statement.

It cited in particular a monument to Russian Empress Catherine the Great — widely reputed to be the city’s founder — that was dismantled by an order of city authorities last year.

Founded in the final years of the 18th century, near the site of a captured Ottoman fortress, Odesa’s location on the shores of the Black Sea allowed it to become one of the most important ports in the Russian empire.