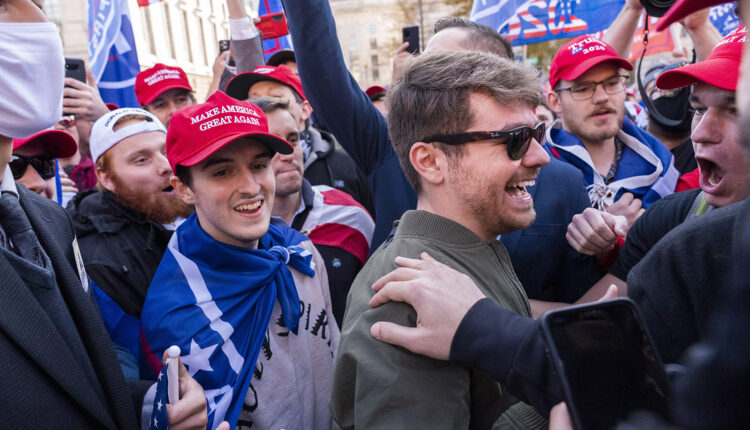 Twitter first banned Fuentes, a Holocaust denier and self-described neo-Nazi, in 2021 for “repeated violations.” In October 2022, Fuentes opened a new account but was quickly banned. His reinstatement Tuesday morning came amid Twitter’s attempts to bring back users who had been banned before billionaire Musk’s Oct. 27 takeover, in an effort to reform what the new CEO and owner has described as inconsistent policies on hate speech. By Wednesday morning, Fuentes’ account was again suspended.

In his brief Twitter comeback tour, Fuentes reveled in his new freedom by spouting late-night obscenities and conspiratorial, antisemitic musings into Twitter Spaces, an audio feature of the social media platform.

For about 20 minutes, more than 3,000 listeners tuned in to the 24-year-old’s rambling speech. Fuentes railed against Jews and “Israel first” policies, saying, “Israel did 9/11, and we love Hitler.”

He also called for more Christians to become world leaders and said he’s “ride or die” for Ye, formerly known as Kanye West, who in recent years has doubled down on branding himself as a Christian. Fuentes now consults for Ye’s 2024 presidential campaign, having shifted his loyalty away from former President Donald Trump.

“I’m not just another grifter,” Fuentes said, explaining that he’s loved Ye since he was a kid and will not bail on him after the rapper’s recent spew of antisemitic remarks, “like the other grifters” who condemned Ye. The musician’s talent agency dropped him, as did Adidas, Gap, Balenciaga, JPMorgan Chase and others.

A few days into Ye’s announcement that he planned to run for president, Ye and Fuentes dined with Trump at his Mar-a-Lago club. Trump claimed he knew nothing about Fuentes before meeting him and did not denounce either man’s past hate speech.

In December, Fuentes sat next to Ye when Ye said he sees “good things about Hitler” on the Alex Jones show “Infowars,” and “I love Jewish people, but I also love Nazis.” Jones raised his eyebrows and looked at Fuentes, who showed support for Ye.

“Ye loves Hitler, and I love Hitler too!” Fuentes said during his Twitter broadcast.

Fuentes also described how, even though he had hoped for years for podcaster and YouTuber Tim Pool to invite him onto his show, when Ye walked off the show on Nov. 29, Fuentes followed. “I’m loyal to Ye,” he said. “I work for him now.” 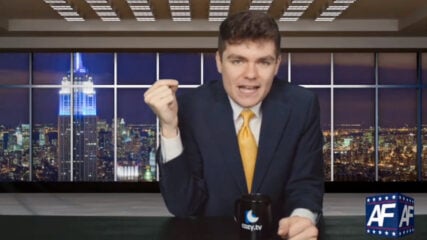 Nick Fuentes in a still from his “America First” livestream. Video screen grab

Fuentes, who identifies as a Catholic of partial Mexican descent, began building an online following after attending the deadly 2017 Unite the Right white supremacist rally in Charlottesville, Virginia. As a college freshman that year he began hosting a regular livestream show, often using jokes to provide plausible deniability for his extreme views. YouTube banned Fuentes in 2020, but he continues to broadcast to his fans on Cozy.tv and Telegram.

Today, Fuentes’ America First movement has grown into an alt-right political platform at odds with mainstream conservatives — including in its call for a 10-year ban on all immigration except for immediate family members of U.S. citizens and a requirement for immigrants to speak English.

Fuentes called the Capitol riot on Jan. 6, 2021, “f—ing awesome” and spoke at rallies leading up to the invasion, encouraging supporters to storm the Capitol and earning himself a subpoena from Congress. Fuentes has also cheered on Russian President Vladimir Putin for dropping bombs on Ukraine.

Before his account was suspended Wednesday, Fuentes tweeted a chart titled “Who Controls Your Mind? 2023” that listed dozens of media corporations, including Universal Pictures, Disney, The Associated Press, ABC, CNN, The New York Times, Google, Reuters, The Atlantic and more, highlighting in red boxes the names of executive leadership who are Jews.

“This is not a TOS [Terms of Service] violation, he was illegitimately mass reported by extremists,” the user “ye crusade” tweeted.

Twitter had not commented on Fuentes’ suspension at the time of this report.

“Well it was fun while it lasted,” Fuentes shared to his Telegram channel on Wednesday.

“You People” is the Black-Jewish movie of the year

His art was an act of ‘sacred listening’ says ‘Portraits in…

Frank Pavone, a priest for the age of Trump