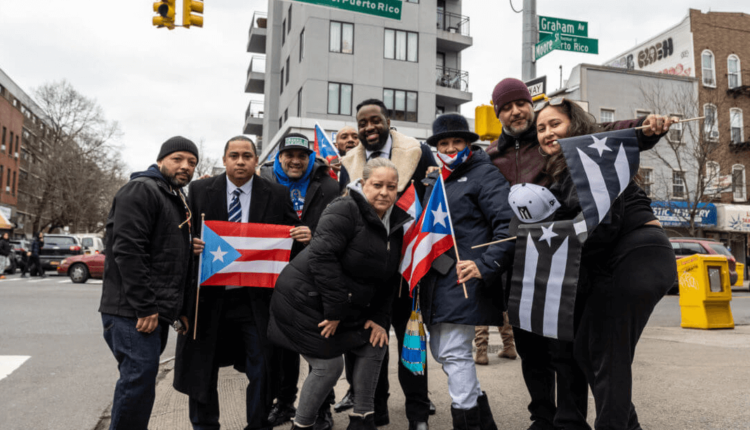 
Despite the DOT backtracking and restoring the sign, Brooklynites are demanding answers from the city after the removal of the ‘Graham Ave-Ave of Puerto Rico’ street sign at Graham Avenue and Moore Street in Williamsburg.

At a rally held outside San German Records on Moore Street on Saturday, January 21, activists demanded answers from Department of Transportation Commissioner Ydanis Rodríguez and Mayor Eric Adams, as well as an apology.

Alejandro Zayas called on Adams and Rodríguez to start a full investigation into who signed the dotted line on the work order. Radames Millan, the owner of San German Shop on Moore Street, witnessed the take-down of the sign on January 13 and immediately called a slew of elected officials, including Congresswoman Nydia Velazquez.

“Apparently, [the phone calls] did work because after two hours, the signs were back up,” Millan laughed.

In a Twitter feed on January 13, the DOT said they mistakenly took the overhead sign down. However, many Puerto Rican activists don’t believe the removal was an accident.

Borincanos say that real estate developers, with the help of elected officials, have long wanted to erase their culture and contributions to the city and push them out of their neighborhood to make room for gentrifiers.

“You will not come in our community and continue to dictate to us who and what and where we are going to be,” Cynthia Perez said. “This is the Avenue of Puerto Rico, and it will remain here for another 100 to 200 years.”

Longtime activist Jason Cruz recalled how Puerto Ricans came together in 2019 and successfully ousted Puerto Rico’s corrupt Governor Ricardo Rosselló. He said those who took down the sign had to answer to the Puerto Rican community.

Raul Rivera, the founder of ‘NYC Drivers Unite,’ asked why the mayor wasn’t at the press conference.

“If you can get on a plane this past summer and visit the motherland, why aren’t you here in Brooklyn?” Rivera asked.

He even accused Dominican-born DOT Commissioner Ydanis Rodríguez of bigotry.

Addressing Mayor Adams, Rivera said the buck should stop with him.

“We know Ydanis Rodríguez is your guy. He’s the head of the DOT. He cannot bring his people up by bringing other people down. If nobody here will say it, I will. I smell bigotry from the DOT. If you know when a sign is going up, you should know when it’s coming down. It’s not a mistake.”

David Aviles, founder of “Puerto Rican Flags Up,” said the removal of the street sign was “disrespectful.”

“What is the problem?” Aviles asked. “You have a problem with the Puerto Rico community of New York, then let it be known because we’re gonna keep fighting for it.”

At an unrelated event on Saturday, DOT Commissioner Ydanis Rodríguez remarked about the incident.

He stressed that as soon as he was told that the sign had been removed, it was back up three hours later. The commissioner also said he would never tolerate any sign of any group being removed.

“My responsibility as an elected official was to call the agency as to what happened. I just wanted to resolve the problem,” Rodríguez said. “Was the sign removed? Yes. Was a mistake made? Yes. Did I fix it? Yes.”

Editor’s note: A version of this story originally ran in Brooklyn Paper. Click here to see the original story.