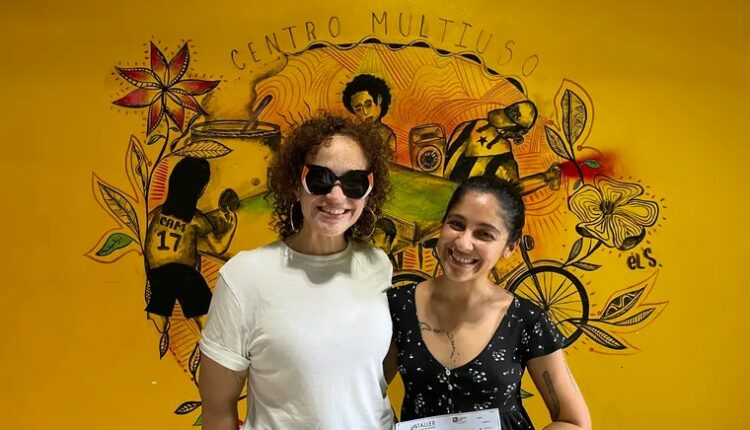 
Nasheli Ortiz González, executive director of Taller Puertorriqueño, has just returned from a trip to Puerto Rico to deliver a $30,000 donation, which was collected mostly from a number of small donors but also included a $10,000 gift from Delia Maria Home Care Agency, a home health care agency on North 5th St. near Indiana Ave.

Ortiz González, who said her organization started raising money for Hurricane Fiona relief efforts the day after the storm hit Puerto Rico on September 18, said the funds will be used to provide the basics — food, water, shelter and medical supplies — for those still trying to recover from the impact of Hurricane Fiona.

“We selected three organizations that we trusted and that were community based,” Ortiz González explained. The groups were Iniciativa de Ecodesarrollo de Bahía de Jobos or IDEBAJO , (IDEBAJO), Taller Salud and Comedores Sociales, and the money was divided equally among them.

Philly Boricuas’ team leader Charito Morales is quickly trying to collect enough school supplies to re-open two schools in the southern parts of Puerto Rico that have been closed since the area flooded in the aftermath of the storm. She has until November 20 to gather the supplies, which will then be shipped by The Coca-Cola Company to the island and given to up to four organizations. Morales said her group is looking for baby formula, baby and adult diapers, water filters, flashlights, batteries and school supplies.

Her hope is that the schools will be completely refurbished during the holiday season, allowing 5,000 or 6,000 students to return to school for the first time since the storm.

“It would be a Christmas miracle,” Morales said.

In addition, Unidos PA’ PR, a conglomerate of 40 local grassroots organizations, including Asociación Puertorriqueños en Marcha (APM), Concilio, and Taller Puertorriqueño, continue to fundraise and collect donations to fill in the service gaps in the local and federal government’s response to the hurricane. These Latinx serving nonprofits joined together as they did in the aftermath of María, when they raised almost $400,000.

But only about $17,000 has been raised over the past two months, one third of the group’s $50,000 goal. Donations have flagged, Morales said, as people have decided to send money directly to relatives on the island. APM President and CEO Nilda Ruiz acknowledged that the donations were coming in slowly in part because the devastation wasn’t as severe as with María, but also because donor attention gets diverted by another crises. “People tend to forget after a while because there is always something (else) coming up.”

Fiona hit five years after Hurricane María blew into the record books as one of the region’s most catastrophic natural disasters. Ruiz said APM was able to provide direct relief to 250 families and assisted over 2,000 people in Philadelphia after María.

A plethora of crises have plagued the island, including infrastructure fails and a 41% poverty rate, higher than any state. And after each disaster, Philadelphia’s Puerto Rican community attempts to raise the money and donate for the island’s three million residents, especially the poorest and the hardest to reach.

But each disaster mkes it increasingly difficult for the island’s residents to recover.

“Puerto Rico has been through so much in recent years: Hurricane María five years ago; a 6.4-magnitude earthquake two years ago. Folks slept outside for days worried about their homes would collapse on them if they went in. Then COVID-19. And then Fiona,” President Joe Biden remarked during speech in Ponce, where he announced $60 million in aid to help Puerto Rico with hurricane preparedness by strengthening its levees and flood walls, as well as creating a new flood warning system.

“Still, we have to do more. We have to ensure that when the next hurricane strikes, Puerto Rico is ready,” Biden told the crowd. According to researchers, Puerto Rico is one of most vulnerable regions in the world to the effects of climate change.

Ortiz González said when she visited, she noticed, unlike in the aftermath of María, the people seemed exhausted. “People are tired of being resilient. It’s one thing after another. Now they say, ‘We’re here. We don’t have any other option.’”

Poland may supply tanks to Ukraine without Germany’s permission