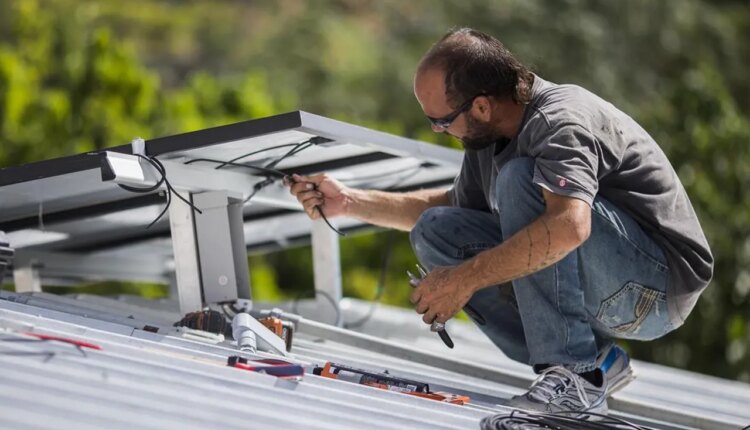 
SAN JUAN, Puerto Rico (AP) — A U.S. government study has determined that with little room on the island for large-scale solar farms or wind generators, Puerto Rico should aim to reach its clean-energy goals by installing solar panels on all suitable rooftops, along with airports, brownfields and industrial areas.

The two-year study began last year after the U.S. pledged to help modernize Puerto Rico’s disintegrating power grid by looking at wind and solar resources on the island, land availability and power consumption. Government officials vowed to ramp up from 3% to 40% renewable energy by 2025, and 60% by 2040.

“This is so utterly important,” said Jennifer Granholm, U.S. Energy Secretary, during a webinar Monday to talk about the study’s preliminary results. “We have set out to cut through bureaucracy and get federal funding moving.“

Amid the threat of powerful hurricanes, Puerto Rico has suffered from chronic power outages blamed on a disintegrating power grid following decades of neglect and lack of maintenance. The island’s current power generation system is 97% based on fossil fuels.

More than 600 participants joined the webinar, including solar companies eager to secure a stake in upcoming projects and disgruntled Puerto Ricans who questioned the reality of implementing solar panels on an island where more than 40% of the population lives below the poverty line.

“These systems are too costly, and truly hardly anyone can afford them because it’s a debt impossible to pay over many years,” wrote one participant named Wanda Trinidad in the chat.

Another, Wanda Ríos, said that while the government has helped some businesses transition to renewable energy, she hasn’t been able to get a response about how communities might be able to obtain financial help.

“We want to have a solar community, but there is (no) program available for us!” she wrote.

A senior official at the U.S. Department of Energy said the $1 billion approved by U.S. Congress in December to help restore Puerto Rico’s grid is not sufficient. U.S. President Joe Biden had sought $3 billion, and federal lawmakers had requested $5 billion for solar rooftop panels and storage installations.

The ongoing study also found that Puerto Rico’s transmission system can accommodate the anticipated growth of renewables for the next five to 15 years, but that upgrades are needed in the long term.

In addition, the study simulated hurricanes and found that smaller renewable resources spread out tend to recover faster than the current system of fewer and larger power plants. Hurricane Maria razed Puerto Rico’s power grid in September 2017 when it struck the island as a Category 4 storm and Hurricane Fiona battered it when it hit in September last year as a Category 1 storm. Both hurricanes caused island-wide blackouts.

“The urgency has only grown after Hurricane Fiona…wreaked so much havoc,” said Granholm, who is expected to visit Puerto Rico this month.

This year, scientists expect to study the possibility of using marine, hydropower and pumped storage hydropower as additional sources of renewable energy, among other things. Scientists also said that initial climate risk assessment showed a temperature increase of up to 2 degrees Celsius and a 20% drop in rainfall by 2055.

The final study, funded by the Federal Emergency Management Agency, will be published by year’s end.

Anyone can read Conversations, but to contribute, you should be a registered Torstar account holder. If you do not yet have a Torstar account, you can create one now (it is free)

Conversations are opinions of our readers and are subject to the Code of Conduct. The Star does not endorse these opinions.

$24M worth of cocaine seized near Puerto Rico; 3 arrested