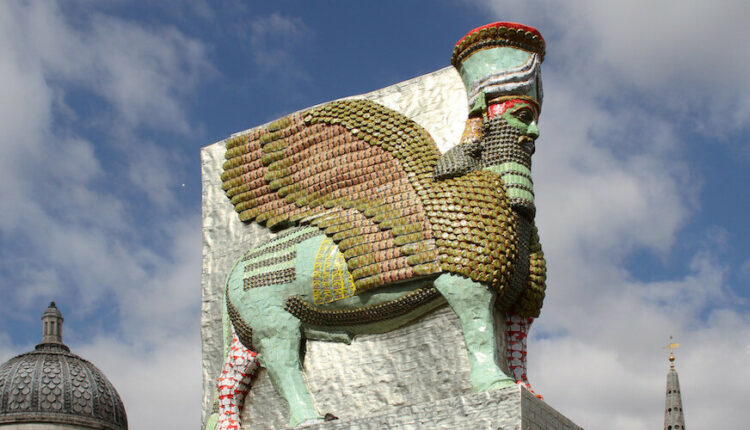 
Iraqi American artist Michael Rakowitz has promised to donate a large-scale work to London’s Tate Modern if the British Museum returns an Assyrian artifact to Iraq. Rakowitz has tendered his 2018 sculpture The Invisible Enemy Should Not Exist, a massive winged bull—or lamassu—made of date-syrup cans, which he created for the prestigious Fourth Plinth commission in London’s Trafalgar Square, the competition itself the subject of recent debate. In exchange, he seeks the repatriation of one of two Assyrian gypsum statues depicting lamassus in the form of human-headed winged lions and dating to roughly 860 BC. The sculptures, which originally flanked the doorway of the throne room of the North West palace of Ashurnasirpal in Nimrud, entered the collection of the British Museum after being unearthed by an English archaeologist in the nineteenth century. Should the exchange take place, Rakowitz wrote in his offer letter to the British museum, it would be “more than just restitutive. It would be restorative.”

According to The Guardian, the Chicago-based Rakowitz, whose work frequently centers Iraq’s cultural losses, began exploring the possibility of the trade in 2020 as a way of responding to what he characterized as the British Museum’s “fucking insane” practice of loaning replicas of artifacts to their countries of origin. His hope is the repatriated sculpture it will help replace a lamassu dating to 700 BC that previously greeted visitors to the Nergal Gate in Nineveh. That monument was purposefully demolished by the Islamic State during its 2015 raid of the Mosul Museum.

The Tate is said to be in private talks with the British Museum regarding the exchange. As well, the offer will be laid before Ahmed Fakkak, Iraq’s new minister of culture, next month, during a planned tour of the British Museum.

Eleanor Robson, a professor of ancient Middle Eastern history at University College London, noted that the British Museum appeared to be relaxing its stance regarding repatriation, as evidenced by its willingness to discuss the return of the fabled Parthenon marbles to Athens. “The mood music seems to be changing,” she said.