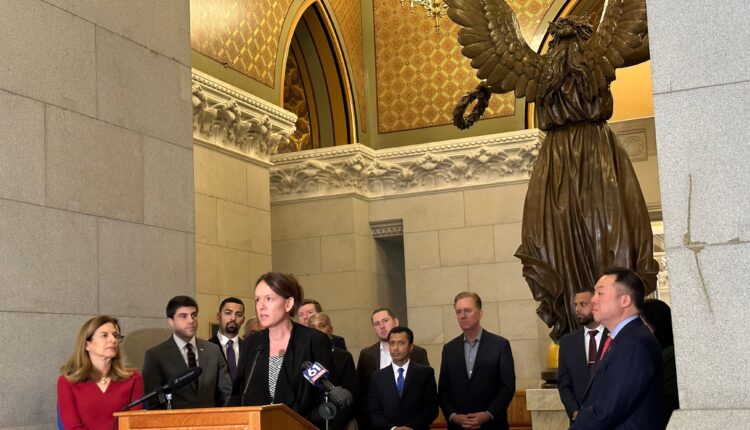 Connecticut would join the growing list of states that allow pharmacists to prescribe hormonal contraceptive pills under a proposal Gov. Ned Lamont announced Monday on the 50th anniversary of Roe v. Wade.

The legislative proposal came on the first anniversary of the landmark abortion-rights ruling since it was overturned by the U.S. Supreme Court, returning control over access to abortion to the states.

“These are some of the things we’re doing every day to push back and make sure you know we’re fighting for your rights,” Lamont said.

Birth control pills can be prescribed by pharmacists in 20 states, according to the American Society of Health System Pharmacists.

Separately, lawmakers from both parties have proposed at least two bills in Connecticut legalizing the sale in vending machines of the emergency contraceptive known as Plan B and the morning-after pill.

Abortion is legal in Connecticut under the terms of a state law passed 30 years ago that essentially codified in state law the tenets of Roe, which forbade states from outlawing abortion before fetal viability.

The governor and other supporters of reproductive rights spoke at a press conference in the north lobby of the state Capitol, where participants bemoaned the court’s reversal and celebrated the political strength of their coalition in the state.

“There’s sadness. There’s disappointment,” said Rep. Jillian Gilchrest, D-West Hartford, co-chair of the Reproductive Rights Caucus. “But I think, most of all, there’s anger. There’s anger that an extremist minority has been able to put individuals’ lives, in particular women, in jeopardy.”

“Disappointment, anger,” Lamont said. “You know what to do: Get back up and you fight back.”

Support for reproductive rights is overwhelming among Democratic elected officials but hardly unanimous: Rep. Treneé McGee, D-West Haven, was a speaker at the March for Life Rally in Washington on Friday.

McGee, who is Black, was cheered as she repeated an assertion she has made on the floor of the Connecticut House that abortion is marketed to minority communities. She called it “the mass genocide of our children.”

“We resist the evil strategies that pluck us out like weeds,” McGee said.

Ten members of the legislature’s Black and Puerto Rican Caucus, all Democrats, voted against a law last year that provides a legal “safe harbor” to women from states with restrictive abortion laws who get abortions in Connecticut, as well as the clinicians who provide them.

The provision that sparked the strongest opposition codified a policy allowing advanced-practice clinicians such as A.P.R.N.s and physician assistants to perform abortions by suction, also known as vacuum aspiration.

This year, four Republican lawmakers have filed a bill allowing Plan B to be sold in vending machines. They are Reps. Devin Carney of Old Lyme, Tammy Nuccio of Tolland, Nicole Klarides-Ditria of Seymour and Tracy Marra of Darien.

At least three bills that would require parental notification for minors to get an abortion have been filed by other Republicans. Such proposals never have gained traction in the General Assembly.