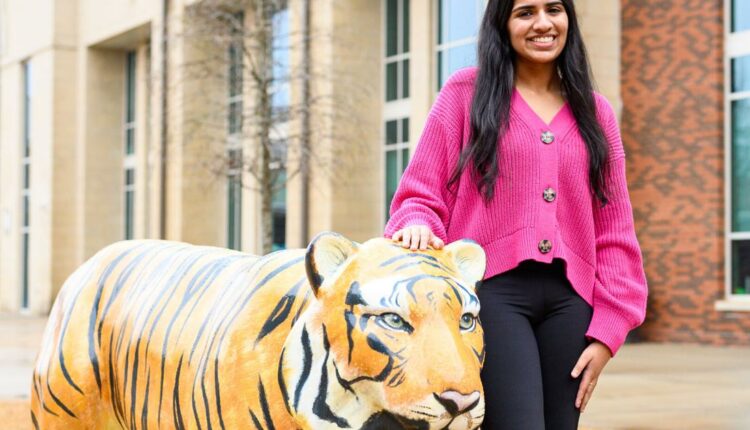 
LAUREN JOHNSON
A local Auburn High School senior has been named one of the top 300 teen scientists selected for Regeneron Science Talent Search, one of the nation’s oldest and most prestigious science and math competitions for high school seniors.

Auburn High School senior Shivani Babu, 17, was selected for her research project that involves a chemical produced in plants that could be used as a treatment for obesity.

“The Regeneron Science Talent Search recognizes and empowers our nation’s most promising young scientists who are generating innovative solutions to solve significant global challenges through rigorous research and discoveries. It provides students with a national stage to present new ideas and challenge conventional ways of thinking,” the Society of Science press release stated.

Scholars are chosen based on their research, leadership skills, community involvement, commitment to academics, creativity in asking scientific questions and exceptional promise as STEM leaders.

Babu and the other 299 students were chosen out of 1,949 applicants from 627 high schools across 48 states, Washington D.C., Puerto Rico and four other countries, according to the release.

“It’s definitely a prestigious honor,” Babu said. “It makes me feel good to know that the work that I’m doing is being recognized.”

Starting in the 9th grade, Babu began working on a research project but the COVID-19 pandemic prevented her from presenting it. She returned to her research the summer before her junior year of high school with a new motivation to discover possible treatments for obesity.

While watching the news at home during the pandemic, Babu said she learned that people who are considered obese have a higher risk of contracting COVID and a higher risk of developing other side effects from the virus.

“It really came to the forefront of my perspective because my father’s uncle in India actually was considered medically obese, and he did pass away from the virus,” she said.

Middleton is also the science learning community coordinator and is in charge of the STEM competitions for grades 6 – 12. She was recognized as the Alabama High School Teacher of the Year for 2019 and 2020.

In the 4th grade, Babu found her passion for STEM and got involved in STEM-related activities at school including the science olympiad team and the science fair.

“I’ve always been fascinated by the idea that a lot of our world just comes from science, and more than the fact that we’ve already discovered so much, there’s still so much to be discovered,” she said.

Since the 6th grade, she’s had Middleton as a mentor while participating in these activities.

“We’re so proud of all the work she’s put in and that the research that she’s been doing is going to actually make a difference,” Middleton said. “Shivani has always been a bright and shining star here at Auburn High School, and we’re just so pleased with her research being rewarded.”

Middleton said this is the farthest an AHS student has gone in this competition.

Babu said she wouldn’t be where she is today without the support of her parents, Ramesh Jeganathan and Geetha Thangiah.

“They’re always encouraging me to go reach my goals and do whatever it takes. No matter how good or bad my idea is they’ll always be there to support me,” she said.

Babu was awarded a scholarship of $2,000, and Auburn High School also received $2,000 to go towards STEM-related activities.

“Auburn City Schools is proud of Shivani for being named in the top 300 Scholars with an opportunity to be one of the top 40 finalists in this nationwide talent search,” ACS Superintendent Dr. Cristen Herring said in an email. “Her first-place award in Cellular and Molecular Biology at the Regeneron International Science and Engineering Fair is just one of many accomplishments as an ACS student. Dedicated to her studies, Shivani has been a Lee County Spelling Bee Champion, earned a weighted 4.6 GPA, and is an IB Diploma Candidate. We wish her the best moving forward in this competition and all of her future endeavors!”

At the age of 13, Babu won first place in the 2019 Lee County Spelling Bee, securing her title for the second year in a row.

Babu said her goal is to continue serving through science and promoting STEM to others.

Her long-term goal is to serve through medicine. She hasn’t committed to a college yet, but she plans to major in some sort of biological science, possibly cellular biology on a pre-medical track.

Babu’s identification of a treatment for obesity is the beginning of the type of service she wants to provide the community.

“Alabama has a really high rate of obesity, and not just in Alabama but nationwide, it’s a growing epidemic,” she said. “People are unaware because it’s seen as more of a social determinant than an actual condition, but the numbers are rapidly increasing.”

On Jan. 24 at 11 a.m. CST, the Society of Science will announce the top 40 finalists who will travel to Washington D.C. in March to present their projects and compete for more than $1.8 million in awards.

“I’m hoping for the best. Whatever happens is great,” Babu said. “The other 299 scholars are just as great. They’re also solving important problems in our world today, so at the end of the day no matter who the top 40 are, every single one of them deserves it.”

Get local news delivered to your inbox!