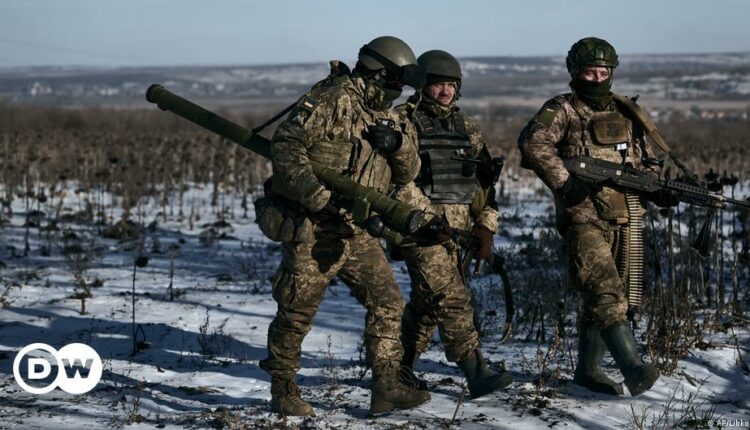 
Russian and Ukrainian forces are currently at a deadlock in three areas of the war-torn country, a daily British intelligence update said Saturday.

“In recent days, the heaviest fighting has focused in three sectors. In the northeast, near Kremina, Ukraine has likely made small gains and successfully defended against a Russian counterattack,” British analysts said based on intelligence reports.

“However, there is a realistic possibility of local Russian advances around Bakhmut,” they added, referring to the town in the eastern region of Donetsk at the center of fighting for months.

Russian units, from the regular army and the Wagner paramilitary group, are regrouping in Soledar, which they recently captured, north of Bakhmut.

In the south, both sides had massed significant forces in the Zaporizhzhia region, the UK said. Artillery fights and smaller clashes were taking place, but so far there was no major offensive.

In its own daily report, the Russian army said it had launched an offensive in Zaporizhzhia on Saturday after several months of an almost frozen front.

Moscow’s forces said they led “offensive operations” in the region and claimed to have “taken more advantageous lines and positions.”

To view this video please enable JavaScript, and consider upgrading to a web browser that supports HTML5 video

Here are other updates on the war in Ukraine on Saturday, January 21:

Ukraine had expected more from Germany out of the Ramstein conference, Ukrainian Ambassador to Germany Oleksii Makeiev said on Saturday, reiterating calls for Berlin to provide his country with state-of-the-art tanks.

“We need German tanks, and we need them now,” Makeiev told the German dpa news agency on Saturday. “We have no time to examine, ponder or hesitate. What we need are decisions, training and coordinated deliveries. And without delay.”

Makeiev spoke one day after the Ramstein conference, which gathered Ukrainian allies at the US air base in western Germany. German leaders said during the conference that they have yet to reach a decision regarding the export of the highly advanced tanks.

Makeiev told dpa that Ukraine “expected more from our German partners.” He nevertheless welcomed a promise during the conference to send military equipment worth several billion dollars to his country.

Germany has recently been under mounting pressure to provide Ukraine with its highly advanced Leopard 2 tanks. Berlin, which has even refused to approve the transfer of the German-made tanks to Ukraine by other countries, is wary of further escalations with Moscow.

A senior adviser to Ukrainian President Volodymyr Zelenskyy urged Kyiv’s allies to “think faster” about stepping up their military support a day after they failed to agree at a meeting at the US air base at Ramstein, Germany, to send Leopard-2 battle tanks repeatedly requested by Kyiv.

“You’ll help Ukraine with the necessary weapons anyway and realize that there is no other option to end the war except the defeat of Russia,” Mykhailo Podolyak wrote on Twitter.

“But today’s indecision is killing more of our people. Every day of delay is the death of Ukrainians. Think faster.”

On Friday, some 50 allies of Ukraine did not reach a consensus on whether to deliver the state-of-the-art military hardware to help Kyiv’s troops stage a counteroffensive against Russia’s invading forces.

No deal on tanks, but hope remains

To view this video please enable JavaScript, and consider upgrading to a web browser that supports HTML5 video

Pressure has been mounting steadily on Germany to send its battle tanks to help Ukraine and to let allies do likewise, but Berlin has refused to act unilaterally.

“We still cannot say when a decision will be taken, and what the decision will be,” German Defense Minister Boris Pistorius told reporters on the sidelines of the event.

The allies did, however, pledge hundreds of millions of dollars in new military aid.

On Saturday, Latvia, Estonia and Lithuania issued a fresh call for Germany to deliver the powerful battle tanks to Kyiv.

“Germany, as the leading European power, has a special responsibility in this regard,” Latvian Foreign Minister Edgars Rinkevics tweeted on behalf of the three Baltic nations.

Ukrainian President Zelenskyy participated in a funeral service for Interior Minister Denys Monastyrskyi, who died in a helicopter crash on Wednesday.

Zelenskyy and his wife attended the ceremony held in Kyiv, according to state news agency Ukrinform.

There were nine coffins in all at the memorial. A total of 14 people, including a child, were killed in the crash in the Kyiv suburb of Brovary.

A funeral service for the victims was also held in Brovary, at the same time as the Kyiv service.

Zelenskyy has tasked the SBU secret service to investigate the cause of the incident, which remains unclear.

The Ukrainian president also called for the removal of the continuing obstructions to food exports from his country by sea.

“More than 100 ships transporting food are lined up near the Bosphorus,” Zelenskyy said on Saturday in a video message to an international conference of agriculture ministers in Berlin.

“Why? Because they need to be inspected, and Russian representatives are blocking this inspection. The ships are detained for weeks,” he said, predicting higher food prices for Europe as a consequence.

For Asia, this also means a growing risk of social instability, and for countries in Africa like Ethiopia or Sudan, empty dining tables for thousands of families, Zelenskyy added, with a pledge to keep supplying the world with food.

Although Russia continued to fire missiles at Ukraine’s infrastructure, including ports and transport, and wage brutal battles in regions crucial to agriculture, “Ukrainian farmers continue to cultivate the fields,” he said.

“Currently, 64 ships are at anchor in Ukrainian ports and inspection zones. The order of their inspection is determined by the Ukrainian side, Russian representatives have no influence on this at all,” the Foreign Ministry in Moscow said in a statement.

Mediated by Turkey and the United Nations, an end to the blockade was agreed upon last summer to defuse the global food crisis. However, Russian warships have the right to inspect the ships’ cargo.

Russia said that it held a training exercise on repelling air attacks in the Moscow region.

“In the Moscow region, a training session was held with the personnel of the anti-aircraft missile brigade of the Western Military District on repelling air attacks on important military-industrial and administrative facilities,” the Defense Ministry said in a statement.

It said an S-300 anti-aircraft missile system was involved in the training as combat was simulated.

“As they marched, soldiers repelled an attack by a mock enemy sabotage group on a military convoy,” the statement said.

The ministry said 150 soldiers took part in the exercises.

But it did not say where in the Moscow region, which surrounds the Russian capital, the training took place.

The Kremlin refused Friday to say if authorities were preparing for strikes on the capital.

Since launching its offensive in Ukraine almost a year ago, Russia has sustained several drone attacks attributed to Kyiv as well as some strikes on border regions.

The head of Wagner, the Russian private military contractor, has written to the White House after Washington announced new sanctions on the group.

White House national security spokesperson John Kirby said Friday that Wagner, which has been supporting Russian forces in their invasion of Ukraine and claiming credit for battlefield advances, would be designated a significant Transnational Criminal Organization.

A letter in English addressed to Kirby and posted on the Telegram channel of Wagner founder Yevgeny Prigozhin’s press service read: “Dear Mr. Kirby, Could you please clarify what crime was committed by PMC Wagner?”

North Korea’s Foreign Ministry called the report groundless, and Prigozhin at the time denied taking such a delivery, calling the report “gossip and speculation.”

Washington had already imposed curbs on trade with Wagner in 2017 and again in December in an attempt to restrict its access to weaponry.

The European Union imposed its own sanctions in December 2021 on Wagner, which has been active in Syria, Libya, the Central African Republic, Sudan, Mozambique and Mali, as well as Ukraine.

Number one thing to do in San Juan on your next cruise!