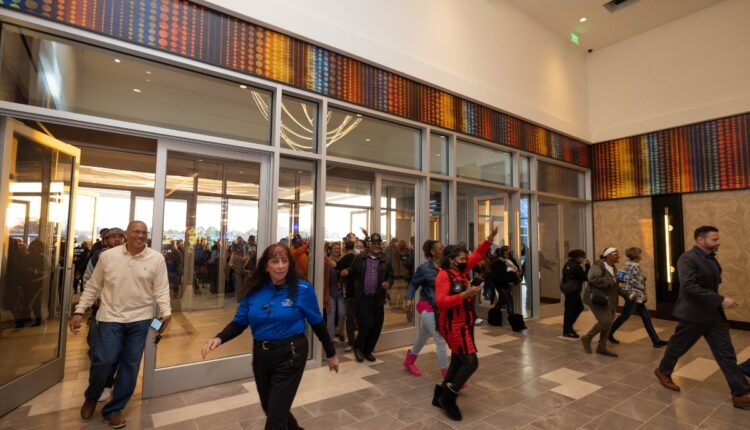 Rivers Portsmouth will become the first permanent casino to open in Virginia next week on Monday, Jan. 23. The casino’s first guests will be able to gamble on slot machines and table games — and as announced today — sports.

Rivers Casino Portsmouth is a $340 million development adjacent to Tidewater Community College’s Portsmouth campus. The casino is just south of I-264 between Missy Elliott and Victory boulevards.

Portsmouth was one of five Virginia cities that qualified to consider a casino development through 2020 legislation. The commercial gaming bill is to help economically distressed cities.

Rivers Portsmouth is set to open this Monday with 1,448 slot machines, 57 table games, and a poker room with 24 tables. Rush Street announced today that the casino’s BetRivers Sportsbook will additionally be open on the property’s first official day in business.

Revenues during the two testing days, however, are not being kept by the casino but instead donated to three local nonprofits: Children’s Hospital of The King’s Daughters, USO Hampton Roads and Central Virginia, and Wesley Community Service Center.

Virginia’s gaming law requires that all games, from slots to tables to sports wagering kiosks, undergo independent third-party testing before the casino opens. Reps from the Virginia Lottery Board, the state’s gaming regulator, have been on-hand during the testing days.

Assuming no glitches are incurred during this morning’s testing, the BetRivers Sportsbook will open to the public the same day the casino opens — Jan. 25 at 10 am EST.

The sportsbook features a 750-foot video wall that can show 30 different games at once. The BetRivers space is equipped with 27 self-service wagering kiosks. A TopGolf Swing Suite with three bays able to accommodate eight players each is also at the sportsbook.

Hard Rock Bristol’s temporary casino space inside the former Bristol Mall was the first legal casino to operate in Virginia. The interim gaming space will operate until the permanent $400 million Hard Rock Bristol resort is complete, which isn’t expected until sometime next year.

Rivers Portsmouth opted to bypass the temporary casino idea in favor of building its permanent gaming facility. Rivers doesn’t have many of the amenities that Virginia’s three other casino resorts in development will have, but opening first provides the benefit of building market share while free of competition. Rivers’ primary competition will come in nearby Norfolk where a $500 million casino resort is being built.

Being the first in the state… it’s surreal,” Roy Corby, Rivers Casino Portsmouth general manager, told WTKR. “Working with the state of Virginia … to get things accomplished  has been a fantastic voyage.”

As for nongaming amenities, Rivers Casino Portsmouth features five restaurants and a Starbucks. The property also has an events center and music venue, plus meeting space.

Super Bowl Betting to Attract 50.4M US Adults, $16B in Wagers

Place Your Super Bowl Bets Yet? Check This! • This Week in Gambling