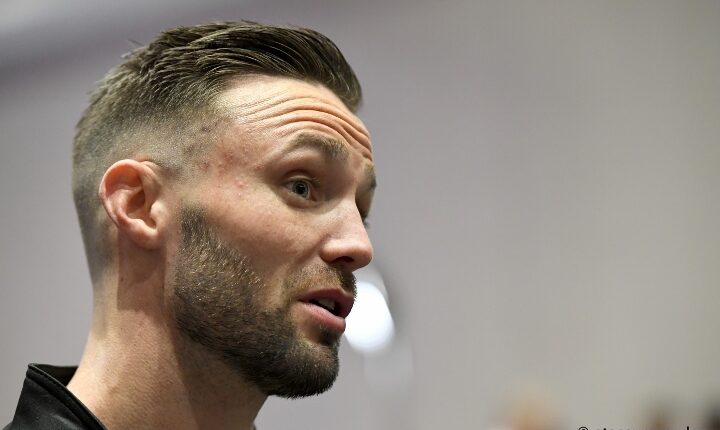 
Yet another delay has come with the Josh Taylor-Jack Catterall rematch.

BoxingScene.com has confirmed that Scotland’s Taylor suffered a tear on the arch of his foot, thus forcing a postponement of his planned lineal/WBO junior welterweight championship defense. The second fight with Catterall was due to take place March 4 at OVO Hydro Arena in Glasgow, Scotland, the same site which saw Taylor claim a questionable split decision victory last February 26.

ESPN.com boxing insider Mike Coppinger was the first to report the development, via social media.

Taylor is expected to be out of the ring from four to six weeks, though it remains unclear if postpones the fight as a whole or if England’s Catterall (26-1, 13KOs) will be afforded a stay-busy fight. One possibility is for an interim WBO title fight to be made available depending on the severity of Taylor’s injury and when the schedule will allow for his ring return, though it remains an unconfirmed option in the early stages of the development.

Also currently in the exploration is preserving the fight date. Taylor-Catterall II was due to headline a Sky Sports Box Office event in the UK, though BoxingScene.com has learned that event promoter Boxxer is looking into moving the card to a regular Sky Sports show.

Representatives from Boxxer were unavailable for comment, as all are on site for Saturday’s Chris Eubank Jr.-Liam Smith Sky Sports Box Office show from AO Arena in Manchester. Top Rank representatives did not immediately respond to an inquiry seeking comment or clarification as this goes to publication.

Taylor and Catterall have not fought since their highly controversial first fight last February. Taylor (19-0, 13KOs) survived an early deficit and eighth-round knockdown to rally in the later rounds en route to a split decision victory. Most viewers thought that Catterall was cheated out of an undisputed junior welterweight championship win.

The closest to justice served for Lancashire’s Catterall was the demotion in status of judge Ian John-Lewis, whose 114-111 scorecard for Taylor industry wide scorn along with disciplinary action from the British Boxing Board of Control (BBBofC).

It did little to change the outcome of the fight, or Catterall’s guarantee of challenging Taylor. None of the four sanctioning bodies saw fit to identify the 29-year old English southpaw as a mandatory challenger, a status he enjoyed with the WBO heading into their first (and, thus far, only) fight. Taylor has since relinquished the WBC, WBA and IBF titles for failure to defend versus their respective number-one contenders, all for the sake of proceeding with a rematch versus Catterall.

The WBO belt remained in his position since the Catterall fight satisfied his mandatory obligation with the Puerto Rico-based sanctioning body. The 32-year-old southpaw from Prestonpans, Scotland inherited Catterall as a mandatory challenger following his twelve-round, unanimous decision victory over then-unbeaten Jose Ramirez in their May 2021 four-belt unification bout in Las Vegas, Nevada. Taylor won by scores of 114-112 on all three cards to defend his IBF and WBA belts, while winning the WBC and WBO titles in their ESPN-televised main event.

Plans for Taylor-Catterall II were initially eyed for last November but pushed back to the first quarter of 2023 due to the lack of venue availability. A working date of February 4 was then scrapped once Sky Sports Box Office added Eubank Jr.-Smith to the schedule, to avoid running two pay-per-view events in a 14-day span.

Taylor also suffered an injury prior to the first fight with Catterall, pushing back a planned December 2021 date in Glasgow back to February 26.

Jake Donovan is a senior writer for BoxingScene.com. Twitter: @JakeNDaBox

Barbados to host 41st Caribbean Travel Marketplace this May

For me, Cubans invented Baseball, says manager of Puerto Rico