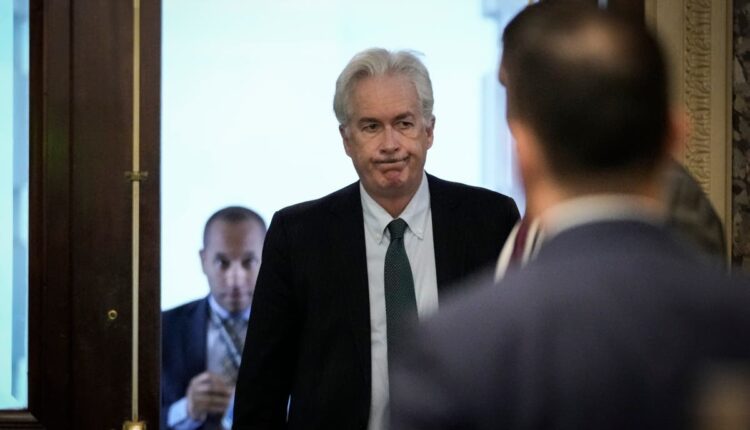 CIA director William Burns held a secret meeting in Kyiv last week with Volodymyr Zelensky, a US official has said.

The CIA director conveyed the latest US intelligence on Russia’s intentions and acknowledged that at some point soon American assistance will be harder to come by, The Washington Post reported.

In the secret top-level meeting, Mr Zelensky and his senior intelligence officials expressed Kyiv’s concerns about how long Ukraine could expect US and Western assistance to continue following Republicans’ takeover of the House of Representatives.

It comes as Ukrainian forces admitted to “stepping back” from Soledar in what they described as a tactical move.

The Volodymyr Zelensky administration has still not confirmed the fall of Soledar, a strategically located mining town, and maintains that the “battle continues”.

And Russia has warned the West against sending long-range missiles to Ukraine as several countries including the UK pledged more support for Kyiv.

British defence minister Ben Wallace said the UK would deliver 600 more Brimstone missiles as part of a package of support from Western allies.

The Netherlands is finalising plans to provide Patriot air missile defence systems to Ukraine with Germany and the United States and will announce further military support to Kyiv on Friday, defence minister Kajsa Ollongren.

Dozens of Ukraine’s allies meet on Friday at a US army base in Ramstein, Germany, with billions of dollars in new weapons to be pledged.

“We are joining the United States, Germany in their project to provide Patriots to Ukraine,” Ms Ollongren told Reuters in an interview on the sidelines of the World Economic Forum in Davos, Switzerland. “We are working out details and will provide details in Ramstein.”

A major question mark remains on whether German-made Leopard battle tanks, which are held by an array of Nato nations but whose transfer to Ukraine requires Germany’s approval, will be on the table today. Germany yesterday said it would not approve the Leopard’s unless Washington pledged to send US-made tanks.

CIA director William Burns visited Kyiv last week to meet with Volodymyr Zelensky, according to a US official who spoke on the condition of anonymity.

Mr Zelensky and his senior intelligence officials shared Kyiv’s key concerns about how long Ukraine could expect US and Western assistance to continue following Republicans’ takeover of the House, reported The Washington Post.

The CIA director conveyed to the war-time president about the urgency of the moment on the battlefield and acknowledged that at some point assistance would be harder to come by, The Post reported citing the people aware of the matter.

Mr Burns has briefed Zelensky repeatedly since Russia launched its invasion of Ukraine last February, passing on US intelligence findings about Moscow’s war plans and intentions.

Russia has been jockeying with France in recent years for influence in Francophone Africa, not least in the CAR, a gold- and diamond-rich country of 4.7 million people.

Since 2018 the CAR government, which is fighting several rebel insurgencies, has been assisted by hundreds of Russian operatives including many from the private military contractor Wagner Group, prominent in Russia‘s invasion of Ukraine.

Western allies are discussing further military support for Ukraine amid intense pressure on Germany to authorise the release of its Leopard 2 battle tanks to bolster Kyiv’s forces in their fight against Russia.

Defence ministers and military chiefs from around 50 nations are expected to take part in the talks convened by US defence secretary Lloyd Austin at Ramstein – the main US airbase in Europe – in Germany today.

It follows the announcement at the weekend that the UK is to become the first nation to respond to president Volodymyr Zelensky’s call for modern western tanks with the dispatch of 14 British Army Challenger 2s.

The US has announced a $2.5bn package of military aid including armoured military vehicles, rockets and artillery shells for Ukraine in a major boost for the war-hit country which is losing ground against Russian attacks in the eastern sector.

A staple in the US army, the armoured Bradley carries a powerful gun and has been used to carry Americans troops around battlefields since the mid-1980s.

Ukrainian forces fighting in the Donbas town of Soledar have admitted to “stepping back” from the site of heavy fighting, which Russian mercenary group Wagner claimed to have captured last week.

He said his soldiers have withdrawn from the town in a controlled and tactical move before a planned counter-attack.

The Volodymyr Zelensky administration has not confirmed the fall of Soledar yet and has maintained that the “battle continues”.

“We have a tough situation here,” Andriy said, and added that the Ukrainian soldiers are killing “50-100 enemy people” every day.

Two Iranian-born Swedish brothers have been given lengthy prison sentences for spying for Russia and its military intelligence service GRU for a decade.

They had appeared before Stockholm District Court, where they faced charges of working together to pass information to Russia between 28 September 2011 and 20 September 2021. A life sentence in Sweden generally means a minimum of 20 to 25 years in prison.

Moldova has requested air defence systems from its allies as it looks to strengthen its capabilities as the war in neighbouring Ukraine continues, but Russian efforts to destabilise the country have so far failed, its president said.

“We have requested air surveillance and defence systems,” Maia Sandu said. “We understand that Ukraine is a priority and should receive that but we [also] hope to receive some.”

Several allies have sent air defence missiles to Ukraine over recent months to shield it from a brutal Russian bombing campaign which has knocked out power for millions across the country.

Moldova, which shares part of its power grid with Ukraine, has also suffered outages.

The Kremlin warned that Ukrainian strikes on Russian-annexed Crimea would be “extremely dangerous”, after The New York Times reported that US officials were warming to the idea of helping Kyiv attack the peninsula.

Crimea, which is internationally recognised as part of Ukraine, was seized by Moscow and declared annexed in 2014. President Vladimir Putin says the peninsula, like much of the Ukrainian land seized since February, is historically Russian.

Ukraine last summer fired a series of missile strikes on Russian airbases in Crimea. An attack on the Kerch Bridge connecting Russia to Crimea in October, which Ukraine never claimed responsibility for, was met by Russia with a devastating bombing campaign against Ukrainian infrastructure.

In a briefing on Thursday, Kremlin spokesman Dmitry Peskov told reporters: “The mere discussion of allowing Ukraine to be supplied with arms that would allow it to attack Russian territory … is extremely dangerous.

“It would mean taking the conflict to a new level, which would not bode well for global and pan-European security.”

Boris Johnson compares Putin to ‘the fat boy in Dickens’

Boris Johnson has compared Vladimir Putin to “the fat boy in Dickens” who wants to “make our flesh creep” with threats of using nuclear weapons (Maryam Zakir-Hussain writes).

Speaking about Ukraine at the World Economic Forum in Davos, the former prime minister insisted that the Russian president would not resort to using nuclear weapons, dismissing the idea as “nonsense”.

He said: “Putin wants to present it as a nuclear stand-off between Nato and Russia. Nonsense. He’s not going to use nuclear weapons, okay. He’s like the fat boy in Dickens, he wants to make our flesh creep. He wants us to think about it. He’s never going to do it.”

“He’s not going to do it. Don’t go down that rabbit hole, stop it,” Mr Johnson added.

MGM Could Make Another Acquistion Run At Entain