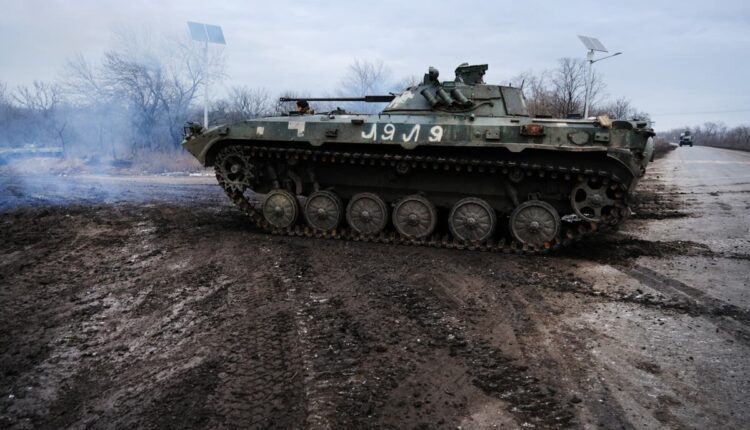 Germany has stalled sending top-tier Leopard tanks to Ukraine for now and has likely imposed a precondition asking the US to send its own tanks, a government source aware of the discussions in Berlin has said, in a massive setback to the war-hit nation.

Chancellor Scholz has stressed the condition about US tanks several times over pressure to send its own indigenous tanks in recent days behind closed doors, the German government source said.

By doing so, Berlin has flexed its veto power in this latest move to deny Ukraine the superior Leopard tanks among the Nato, fielded by Nato-allied armies across Europe.

Ukraine has pleaded with its allies, especially in Europe, to help with military aid to outpace Russian missile offensive on the battlefield as it is currently using Soviet-era tanks to repel attacks.

Vladimir Putin has responded to pledges of tanks for Ukraine with a boast that Russia will boost its military industrial production.

Volodymyr Zelensky confirmed that the security service of Ukraine has initiated a criminal investigation into helicopter crash in Kyiv’s Brovary.

Olaf Scholz’s administration has said Germany will allow its indigenous tanks to be sent to Ukraine to help defend against Russia only if the United States agrees to send its own tanks, government sources have told Reuters.

This comes despite pleading from Ukraine which has sought its European allies to help with military aid and outpace Russian missile offensive.

Chancellor Scholz has stressed the condition about US tanks several times in recent days behind closed doors, the German government source said.

Berlin has flexed its veto power in this latest move to deny Ukraine the superior Leopard tanks among the Nato, fielded by Nato-allied armies across Europe.

Defence experts have condemned the move as the sought after Leopard tanks, considered to be among the best in west’s possession, as it was dubbed to be the most suitable for Ukraine.

Volodymyr Zelensky has been calling on nations to provide for new modern Western weapons, especially heavy battle tanks, so it can regain momentum this year following some battlefield successes in the second half of 2022.

Canada will send 200 Senator armoured personnel carriers to Ukraine as part of a new package of military assistance, defence minister Anita Anand said on a visit to Kyiv today.

The Canadian defence ministry said in a statement that Ukraine had specifically requested the vehicles and that Ms Anand was meeting officials including defence minister Oleksii Reznikov in the Ukrainian capital.

The remainder of the C$500m will be made up by the Nasams surface-to-air missile system Canada announced last week it would be sending.

US secretary of defence Lloyd J Austin III has reached Berlin to meet his new German counterpart ahead of the Ukraine defence contact group meeting at Ramstein Air Base later this week.

“We’ve worked with Germany very closely since the beginning of this crisis,” a US senior defence official said speaking on background.”

The United States is really focused right now on making sure that Ukraine has what it needs to deal with what is right in front of it,” the official said.

The secretary of defence will be joined by chairman of the Joint Chiefs of Staff General Mark A Milley at Ramstein.

“This will be the eighth meeting of the UDCG and the fifth in-person session since the international group was formed in April. They will join ministers of defence and chiefs of defence from nearly 50 nations from around the world to discuss Russia’s ongoing war in Ukraine, and the continued close coordination to provide the Ukrainian people with the means necessary to defend their sovereign territory,” a statement from the US department of defence said.

US eyes shifting dynamic in Ukraine war without Abrams tanks

The United States is looking to break the dynamic of grinding warfare inflicted by Russia as front lines in Ukraine remain near-frozen with newly announced military capabilities that it hopes will catapult Kyiv’s offensive against Russian forces, a senior Pentagon official has said.

“I just don’t think we’re there yet,” Mr Kahl said, after just returning from a trip to Ukraine.

“The Abrams tank is a very complicated piece of equipment. It’s expensive. It’s hard to train on. It has a jet engine.”

The west and Ukraine have entered a stalemate with demands of modern battle tanks as Volodymyr Zelensky has urged his allies, especially those in Europe to help his troops with better artillery instead of the Soviet-era tanks still being used.

Ukraine needs a “significant increase” in weapons at a pivotal moment in Russia’s invasion and such support is the only way to a negotiated peaceful solution, Nato secretary general Jens Stoltenberg said.

Nato and defence leaders from around 50 countries will hold talks at Germany’s Ramstein Air Base on Friday, the latest in a series of meetings since Russian forces swept into Ukraine nearly 11 months ago.

“This is a pivotal moment in the war and the need for a significant increase in support for Ukraine,” Mr Stoltenberg told Reuters in an interview on the sidelines of the World Economic Forum in Davos, Switzerland.

“If we want a negotiated peaceful solution tomorrow we need to provide more weapons today.”

US to send $125m to Ukraine to support energy systems

The US will provide $125m to Ukraine to support its war-hit energy and electric grids battered in the targeted attacks on those utilities by Russian forces, secretary of state Antony Blinken has said.

She announced the Biden administration’s intent to work with Congress to provide $125m to support the resilience of Ukraine’s energy and utility infrastructure in the face of the Russian federation’s relentless, systematic attacks. Funding will be drawn from the 2023 Additional Ukraine Supplemental Appropriations Act passed in December, she said at the World Economic Forum in Davos.

“Since the beginning of the war, and particularly since October 2022, the Russian Federation forces have deliberately targeted critical infrastructure like heating, power, and gas systems in an effort to weaponise the winter,” the US official said yesterday. She

Ukraine has demonstrated tremendous resilience in the wake of these attacks, she said, adding that utility workers have routinely risked their lives to repair the damage, often within hours of air strikes.

Russian warbloggers are unable to find agreement on the state of the Kremlin’s claim to Soledar, the Ukrainian town which Moscow said it had taken over last week after days of heavy fighting.

The difficulty, according to military observers, is that the Kremlin has yet to find a way of framing advances in the small Donetsk mining town as tactically significant in Russia’s wider goal of capturing the Donbas region.

Last week, some analysts said Russian capture of Soledar could block supply lines for Ukrainian troops defending the nearby city of Bakhmut – now bloggers such as the widely-followed Rybar and Readovka are at odds on the most important impact of the claimed capture.

In its daily update on the Ukraine war, the Institute for the Study of War said: “The fact that the Russian information space has not identified the key ground line of communication that Russian forces are now better positioned to take, or any other operational advantage associated with Russian tactical advances in Soledar further underscores that the offensive to capture the settlement has not significantly changed Russian operations in the wider Bakhmut area.”

The top British official was being asked whether the country was making its fair share of commitments to Nato and the war in Ukraine.

It comes as the Canadian Government announced plans to donate 200 armoured vehicles to Ukraine, amid the ongoing Russian invasion.

Mr Cleverly, who met with US secretary of state Antony Blinken on Tuesday, said “Canada is doing a huge amount for Ukraine”.

“One of the things that we need to understand is that the whole point of an alliances is that we integrate what we do, that we don’t duplicate unless desirable to or less absolutely necessary, that we coordinate and we make sure that we bring our respective strengths to the table.

He said Mr Klymenko had officially been appointed to the role of deputy interior minister, but would fulfil the responsibilities of the minister.

Russia in it ‘for the long haul’, says Nato deputy

Russia is preparing for an extended war so Nato must get ready “for the long haul” and support Ukraine for as long as it takes, the alliance’s deputy secretary general told top military chiefs from across Europe.

Speaking at the opening of the military leaders’ meeting in Brussels, Mircea Geoana said Nato nations must invest more in defence, ramp up military industrial manufacturing, and harness new technologies to prepare for future wars.

As Russia’s war on Ukraine nears the one-year mark, Nato chiefs are expected to discuss how allies can expand the delivery of weapons, training and support to Ukraine in the coming months, and how they can further shore up their own defences.

“We have no indication that Putin’s goals have changed,” said Mr Geoana, adding that Russia has mobilised more than 200,000 additional troops.

“So we must be prepared for the long haul. 2023 will be a difficult year and we need to support Ukraine for as long as it takes.”

DraftKings Profitability Could Arrive Much Sooner Than Previously Thought