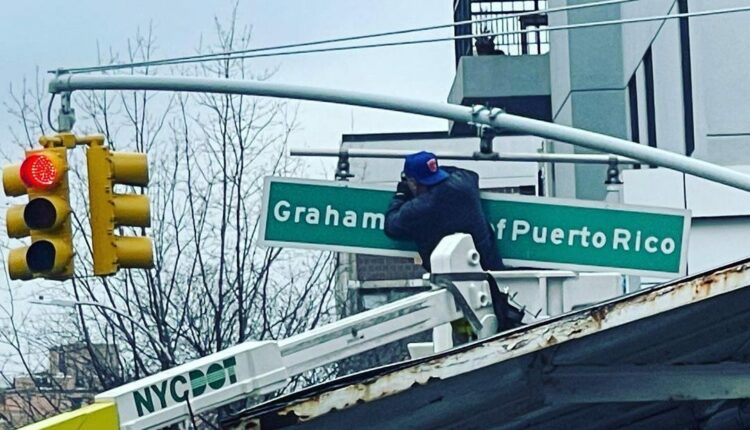 
Last week, neighbors noticed Department of Transportation workers removing the Graham Av-Av of Puerto Rico sign where it intersects with Moore Street — as seen here in a post from Gyvis Santos (@digiwaxxgee on Instagram) — before being replaced with one that simply read Graham Av.

The news quickly gained traction, especially among Puerto Rican community members demanding answers among rising fears of erasure from the city (the sign had been a fixture for over 30 years) and real estate companies. Nueva Yorkinos, a digital archivist group with an active social media presence, cited a 2013 quote from Brooklyn developer Michael Schlegel suggesting that the removal of Puerto Rican and Spanish elements of the neighborhood would “would help the image of the area” (from the 2013 Gothamist article “Who’s Trying To Erase East Williamsburg’s ‘Avenue of Puerto Rico?’”). Following the initial replacement, two other signs were said to be replaced with Graham Av. signs.

After demanding answers from local lawmakers and DOT alike (including an in-person protest near the affected intersections), the original sign was put back up at Moore Street hours later, and with it came what many consider a lackluster response. The DOT said the sign was “mistakenly removed” and that “generally, DOT’s overhead signage does not reflect the co-namings of streets — which are usually found only on street pole signage. However, the signage on Graham Avenue/Avenue of Puerto Rico was an important exception to that practice and is rightfully being restored.”

City councilmember Jennifer Gutiérrez joined in on the calls for accountability and dissatisfaction with the response from DOT.

“Williamsburg and North [Brooklyn] is home to a deeply-rooted Puerto Rican diaspora. The contributions of the Boricua community here and across NYC are immeasurable, but when so little has been done to acknowledge that, a street sign like ‘Avenue of Puerto Rico’ means so much,” Gutiérrez expressed in a now-gone Instagram story statement. “DOT has shared that it was an error and that the sign will go back up … but myself and so many of our leaders are still angry. We demand accountability. I mean this, Graham Ave will always be Avenue of Puerto Rico.”

No statements have yet to be made about the reasoning behind the decision. Members of the Puerto Rican community and other concerned allies gathered during the Brooklyn Community Board 1 Transport Committee meeting on Tuesday seeking an explanation from Mayor Eric Adams and DOT Commissioner Ydanis Rodriguez.

A public press conference and community speak-out has been planned at the Moore Street intersection by local organizer Alejandro Zayas to amplify the ask for a more thorough response from Adams and Rodriguez. It starts this Saturday, January 21, at 12 p.m.