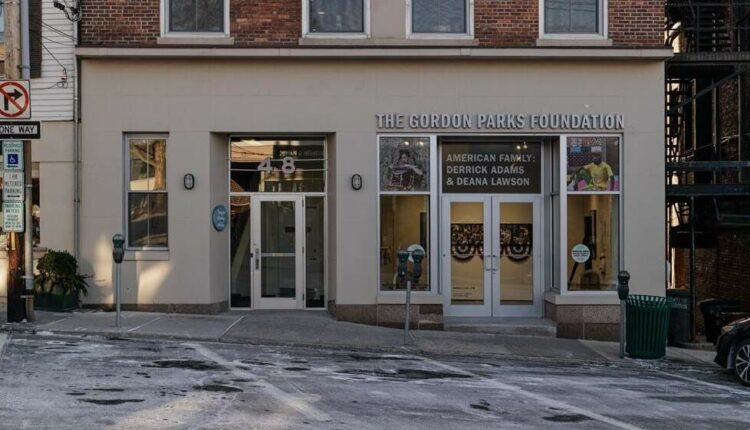 
The Gordon Parks Foundation has announced painters Jammie Holmes and José Parlá as the recipients of its 2023 fellowships and named art historian and scholar Melanee C. Harvey as the Genevieve Young Fellow in Writing. Each will receive an award of $25,000 in aid of new and ongoing projects centered around representation and social justice; Holmes and Parlá will exhibit their work in respective solo shows at the foundation’s Pleasantville, New York, gallery.

“This year’s art fellows are both painters whose work moves Gordon Parks’s legacy forward in important ways, while Melanee’s writing fellowship project at Howard University brings forth an important new historical context to his work,” said the foundation’s executive director, Peter W. Kunhardt Jr., in a statement. “We are proud to support the thought-provoking, innovative work of Jammie, José, and Melanee.”

The foundation launched the arts fellowships in 2017 in honor of Parks, who received similar support early in his photography career. The Genevieve Young Fellowship in Writing, named for Parks’s former wife, a renowned book editor, was inaugurated last year, expanding the foundation’s reach and honoring Young’s work. Partnering with the organization this year on the writing fellowship is Howard University in Washington, DC, which recently acquired a collection of photos by Gordon Parks spanning five decades.

The Dallas-based Holmes, a native of Thibodaux, Louisiana, is a self-taught artist who explores themes of Black life, particularly in the present-day American South, in work that embraces portraiture, symbols, text, and objects. “Gordon Parks’s courage in capturing moments of everyday life has been a longtime inspiration to me as an artist and individual,” said Holmes in a statement. “I am excited to explore Parks’s legacy and bridge the gap between his work and contemporary perspectives.”

Parlá, who was born in Miami to Cuban parents, centers the vitality of metropolitan life in his work, which at once embraces expressionism, abstraction, and urban realism. “Gordon Parks’s unique approach and message have paved the way for many to clearly see the issues of civil rights, race relations, poverty, and urban life,” said Parlá in a statement. “His work continues to inspire me.”

Harvey, an associate professor of history at Howard University, will explore the social structures and sites of religious practice Parks documented in his photographs from the 1930s through the late 1970s. The university will offer collaborative programming to complement an exhibition mounted at both the Gordon Parks Foundation Gallery and the school. “Receiving the support of the Gordon Parks Foundation marks a significant milestone in my study of the visual culture of Black religion and spirituality but also in the practice of photo history at Howard University,” said Harvey in a statement. “I am excited about the opportunity to study Parks’s photographic practice through The Gordon Parks Legacy Collection as well as the rich collection of historic African American photography at the Moorland-Spingarn Research Center at Howard University.”