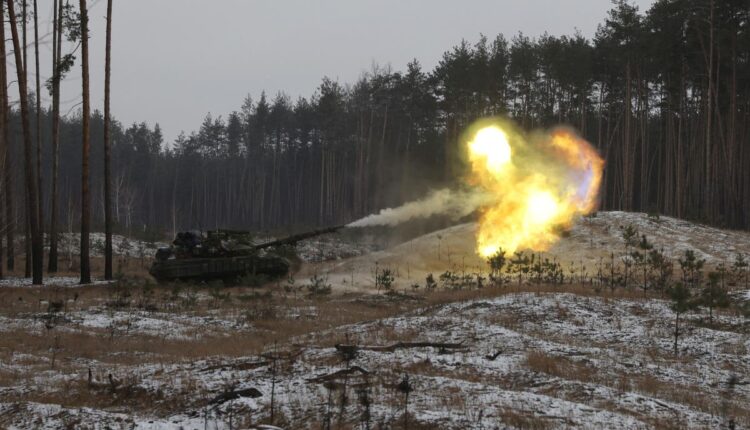 Ukraine interior minister Denys Monastyrsky and three children are among at least 18 people dead after a helicopter crashed near a nursery in a suburb of Kyiv, officials say.

Nine of those killed were onboard the emergency services helicopter that crashed in Brovary, to the east of Kyiv, according to national police chief Ihor Klymenko. The nine included two other senior ministry officials.

At least 20 people have been injured, including multiple children. Mr Monastyrskyi, responsible for the police and security inside Ukraine, would be the most senior Ukrainian official to die since the war began.

Meanwhile, Ukraine is inching closer to securing approval for German-made Leopard 2 tanks. British defence secretary Ben Wallace is set to meet his counterparts from the Baltic countries to build more pressure on Berlin to send the heavy war vehicles to Kyiv.

This comes amid fears in Kyiv that Vladimir Putin could order his troops to make a final “final push” on the anniversary of Russia’s invasion of Ukraine.

Officials in Ukraine say the death toll from a helicopter crash earlier has risen to 18.

The helicopter came down close to the nursery and a residential building in Brovary to the northeast of the capital, local officials said.

The regional governor said multiple people – including children – have been hurt.

He said: “Today, a terrible tragedy occurred in Brovary, Kyiv region. A state emergency services helicopter crashed, and a fire broke out at the crash site.

“The exact number of victims of the tragedy is currently being established. Among them are minister of internal affairs of Ukraine Denys Monastyrskyi, his first deputy Yevhen Yenin, state secretary of the ministry of internal affairs Yuri Lubkovych, their assistants and the helicopter crew.

“25 people were injured, including ten children. As of this minute, three children died. The pain is unspeakable. The helicopter fell on the territory of one of the kindergartens. “I have instructed the security service of Ukraine, in cooperation with the national police of Ukraine and other authorised bodies, to find out all the circumstances of what happened. All services are working on the scene of the tragedy.”

“My condolences to all the families and friends of the victims. Denys, Yevhen, Yuri, the team of the ministry of internal affairs … true patriots of Ukraine. May they rest in peace. May all those whose lives were taken this black morning rest in peace”.

Lithuania’s foreign minister said on Wednesday he was confident main battle tanks would be delivered to Ukraine after holding talks with partners at the World Economic Forum, but that the West still needed to do more to ensure Kyiv won the war.

“I’m confident because this is what I’m hearing here, talking with other leaders. There is momentum,” Gabrielius Landsbergis told Reuters in an interview on the sidelines of the forum, adding that after Britain announced it would send Challenger tanks, there was less argument for others not to.

Pope Francis on Wednesday condemned the Russian missile strike on an apartment building that killed 45 people, including young children, in the eastern Ukrainian city of Dnipro as heartbreaking.

As he has in nearly all of his public appearances since Russia invaded Ukraine last February, Francis appealed for peace at his weekly general audience in the Vatican.

“Last Saturday another missile attack caused many civilian victims, among them children. I share in the heartbreaking pain of the family members,” he said.

“The images and the accounts of this tragic episode are a strong appeal to all people of conscience. One cannot remain indifferent,” he said.

A total of 45 people have been confirmed killed in the strike.

Ukraine says the apartment building was struck by a Russian Kh-22 missile. The Kremlin said its wave of missile strikes on Saturday did not target any residential buildings.

The governor of Kyiv, Oleksiy Kuleba, has said this on Telegram:

“11.40am. In Brovary, a rescue operation is underway at the scene of the tragedy. Debris analysis is underway. Children from the kindergarten are in another educational institution, and the relevant services work with them. The circumstances of the disaster are currently being investigated. All emergency services are on site.

Jailed Kremlin critic Alexei Navalny has used the second anniversary of his incarceration to reinforce his promise to keep opposing the Kremlin, as his family and allies launched a campaign to free him.

Mr Navalny was arrested exactly two years ago as he returned to Russia from Germany, where he had been treated for poisoning with a deadly Soviet-era nerve agent in what he and some Western nations said was a state assassination attempt. The Kremlin denied involvement.

Unclear at this stage how helicopter crashed

Officials gave no immediate account of the cause of the crash and there was no immediate comment from Russia.

Interior minister Denys Monastyrsky, responsible for the police and security inside Ukraine, would be the most senior Ukrainian official to die since the war began.

National police chief Ihor Klymenko said Mr Monastyrsky had been killed along with his deputy and other senior ministry officials.

A helicopter crash in a Kyiv suburb Wednesday killed 16 people, including Ukraine’s interior minister and two children, according to Ihor Klymenko, chief of Ukraine’s National Police.

Nine of those killed were aboard the emergency services helicopter that crashed in Brovary, Kyiv’s eastern suburb, Klymenko said.

A total of 22 people were injured, including 10 children. Earlier, officials and media reports said the helicopter crashed near a kindergarten.

The United States sent a munitions stockpile stored in Israel to Ukraine for use in the war against Russia, the New York Times reported on Wednesday, saying the decision was made last year when Washington’s Middle East ally was under a centrist premier.

An Israeli official confirmed the report to Reuters, saying that then-prime minister Yair Lapid approved the transfer although the United States does not formally need such consent.

While it has condemned the Russian invasion of Ukraine, Israel has limited its assistance to Kyiv to humanitarian aid and protective gear, while ruling out a direct weapons supply.

The Israelis want to maintain a coordination hotline with Russia, set up in 2015, over their military strikes on suspected Iranian targets in Syria, where Moscow has a garrison. They are also mindful of the welfare of Russia’s big Jewish community.

The Israeli official did not know if any further such U.S. arms transfers from Israel were expected under conservative prime minister Benjamin Netanyahu, who took office on 29 December and who, during previous terms, had cultivated a personal rapport with Vladimir Putin, the Russian president.

The US Embassy in Israel had no immediate comment on the New York Times report. Ukrainian ambassador Yevgen Korniychuk told Reuters by phone that he had “no idea” if the report was true. The Russian embassy declined comment.

A helicopter crashed near a nursery and a residential building in the town of Brovary outside the Ukrainian capital Kyiv on Wednesday, and there were casualties, the local governor said.

“At the time of the tragedy, children and staff of the institution were in the kindergarten. Everyone has now been evacuated,” Kyiv region governor Oleksiy Kuleba wrote on the Telegram messaging app.

New COVID subvariant is now dominant across the U.S., accounting for 43% of all new cases in latest week, CDC says