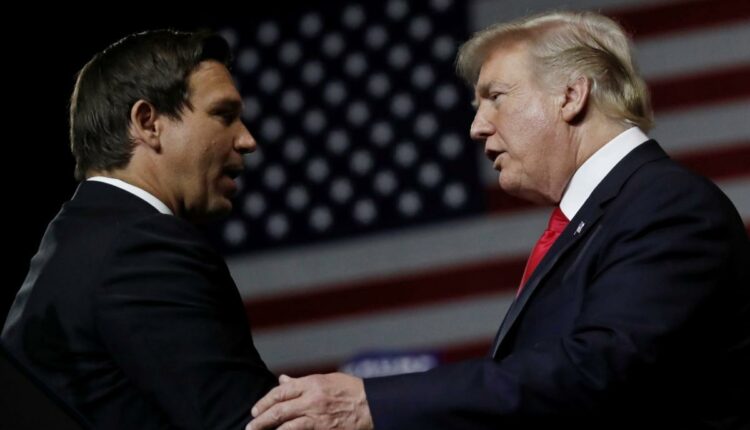 ‘We’ll handle that the way I handle things’

“So, now I hear he might want to run against me. So, we’ll handle that the way I handle things,” Trump said.

Trump also claimed credit — as he has repeatedly done in the past — for DeSantis having clinched the governorship in 2018, saying, “I got him elected, pure and simple.”

DeSantis has not announced that he will run for president, but he has hinted that he might. During a debate in October, DeSantis did not commit to serving four full years as Florida’s governor. Insider’s Kimberly Leonard also reported in November that DeSantis is releasing his first autobiography, a key indicator that he is looking toward a White House run.

DeSantis has also become a prominent frontrunner to challenge Trump for the Republican presidential ticket. In a YouGov poll of 413 Republicans three days after the 2022 midterms, 42% of the respondents said they would rather have DeSantis as the GOP’s 2024 nominee. Only 35% said they prefer Trump.

Meanwhile, Trump has not held back from insulting DeSantis. In November, Trump dubbed the governor “Ron DeSanctimonious” during a rally and blasted him as “average” on social media.

In private, Trump also does not appear to be DeSantis’ biggest fan. In January 2022, Axios’ Jonathan Swan reported that Trump was trash-talking the governor behind closed doors, slamming him for his perceived ungratefulness and saying DeSantis has a “dull personality.”

DeSantis, meanwhile, has avoided addressing Trump’s insults and refrained from hitting back. At a November 16 press conference, DeSantis told people to “chill out” about a possible GOP civil war between him and the former president.

Representatives for DeSantis and a spokesman at Trump’s post-presidential office did not immediately respond to Insider’s requests for comment.