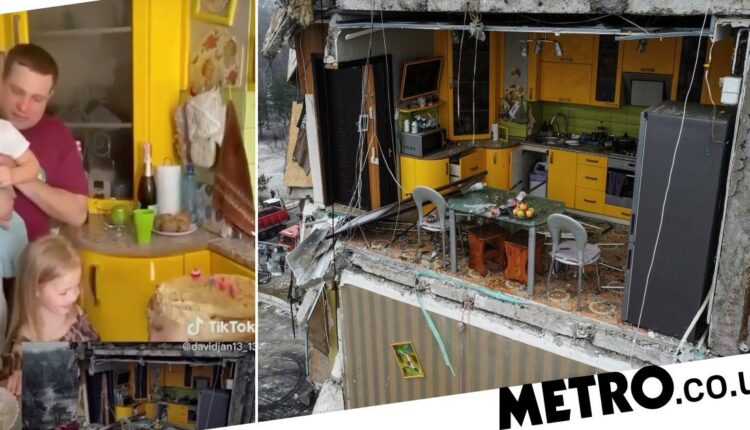 Ukrainian dad celebrates daughter’s birthday before he was bombed

To view this video please enable JavaScript, and consider upgrading to a web
browser that
supports HTML5
video

Heartbreaking footage shows a Ukrainian family celebrating a little girl’s birthday before her dad was killed by a Russian bomb.

In the video, boxing coach Mikhailo Korenovsky, 39, can be seen holding one of his daughters while the other blows out candles.

His oldest daughter and wife Olga, 38 also give the birthday girl a hug in the family’s bright yellow kitchen.

The clip was taken before their flat block in Dnipro was blown up by Russian bombs over the weekend.

The couple’s daughters were reportedly wounded and are in intensive care.

A photo from after the blast shows the same yellow kitchen completely destroyed.

Olga, a personal trainer, wrote about the photo: ‘Instead of this hole, this is where my apartment used to be, in which I lived with my family for nine years.

‘At the time of the explosion, my children and I were out for a walk and my husband came home after a competition, ate, and was due to come out and join us.

‘There is now no connection with him, either among the living or the dead.’

The most recent death toll from the Dnipro strike is 35, which includes two children. Some 39 people were rescued, with 75 wounded.

The fate of another 35 residents in the destroyed apartment block is unknown, with fears dozens are still trapped under the rubble.

President Volodymyr Zelensky said: ‘There is no doubt: every person guilty of this war crime will be identified and brought to justice.’

Get in touch with our news team by emailing us at webnews@metro.co.uk.

For more stories like this, check our news page.

Get your need-to-know
latest news, feel-good stories, analysis and more

ESPN Spin-Off Could Be Used To Satisfy Activist Investor Peltz