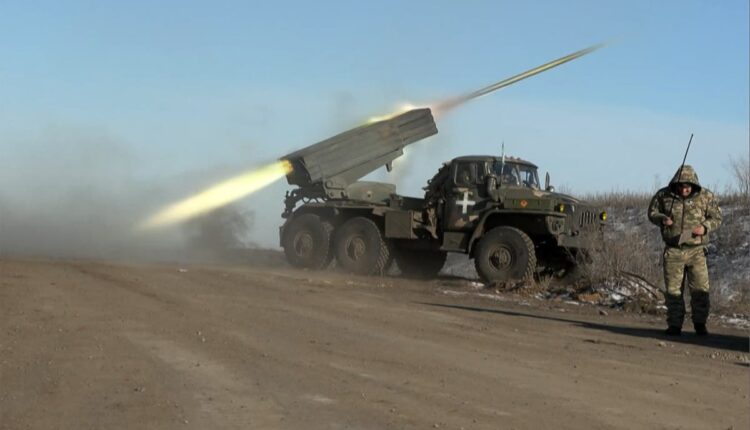 Russia has sanctioned British foreign secretary James Cleverly in a punitive move over the Ukraine war and asked the top official about why he has supported “neo-Nazism” and the Kyiv administration run by Volodymyr Zelensky.

“Dear James, you don’t understand. This is for the anti-Russian course and personal sanctions. But you still have to answer for the support of the Kyiv regime and neo-Nazism,” Russian foreign ministry spokesperson Maria Zakharova said yesterday.

The British official, who will hold diplomatic talks with his US and Canadian counterparts starting today to rally more support for Ukraine, confirmed that he has been targeted by Moscow, and added that if that were the price to be paid for supporting the war-hit nation, then he was happy to be sanctioned.

This comes as German defence minister Christine Lambrecht resigned from chancellor Olaf Scholz’s government yesterday amid rising discontent on her ability to revive Germany’s armed forces with the war playing out in Europe.

Russia has warned that any Challenger 2 tanks that Britain sends to Ukraine to help the war effort “will burn”.

The Norwegian directorate of immigration, also known by its Norwegian acronym UDI, confirmed to The Associated Press that the mercenary member has sought shelter in Norway.

“For reasons of security and privacy, the UDI cannot comment further on this matter,” UDI said in an email.

Volodymyr Zelensky has thanked the British administration for helping Ukraine by sending military aid, latest in the slew of ammunition and military vehicles being poured into the war-hit country by the west.

Today, there is a good example from the UK. A new package of defence assistance has been announced – exactly what we need. Tanks, other armoured vehicles, artillery.

What we discussed with Prime Minister Sunak. I thank you, Rishi, I thank every Briton for the tangible and timely support!” Mr Zelensky said in his nightly address yesterday.

He added: “What happened in Dnipro, the fact that Russia is preparing a new attempt to seize the initiative in the war, the fact that the nature of hostilities at the front requires new decisions in the defense supply – all this only emphasizes how important it is to coordinate our efforts – efforts of all members of the coalition to defend Ukraine and freedom. And to speed up decision-making.

Explosions have been heard in the Russian city of Belgorod and Belgorod district early this morning, regional governor Vyacheslav Gladkov reported via Telegram.

Just 24 hours earlier, an explosion in Belgorod claimed three lives and wounded 16 others, officials said after an ammunition detonated at a Russian base at the Tonenkoye farm, in the Korochansky district. Another eight people have been reported missing.

A Wagner Group commander who claims to have deserted the Russian mercenaries is willing to testify against its leaders has described a harrowing escape across a desolate Arctic frontier to seek political asylum in Norway.

Andrei Medvedev told human rights activists of a night spent dodging bullets, evading sniffer dogs and running across a frozen river in a night gown at the northernmost reaches of mainland Europe – in favour of the brutal retribution he claims to fear at the hands of his last employer.

You can read more details here:

“Sergei Shoigu thanked the servicemen who courageously perform tasks in the special military operation zone, and presented state awards to the servicemen for their dedication and heroism,” the ministry said in a statement on its Telegram messaging app.

Volodymyr Zelensky has said that Ukrainian authorities in the security service have already started gathering information about Russian military involved in preparing and and carrying out this strike on an apartment building in Dnipro.

“This strike at Dnipro, as well as other similar strikes, falls, in particular, under the jurisdiction of the International Criminal Court. And we will use all available opportunities – both national and international – to ensure that all Russian murderers, everyone who gives and executes orders on missile terror against our people, face legal sentences. And to ensure that they serve their punishment,” Mr Zelensky said.

He added: “There is no doubt: every person guilty of this war crime will be identified and brought to justice.”

The UN’s office of the high commissioner for human rights has totalled the civilian casualties in the Ukraine war to more than 18,000 since the first day of Russian invasion in its latest update.

As of Sunday, the top UN office has recorded 18,358 civilian casualties in the country, out of which 7,031 people have been killed and 11,327 injured.

The minister said that she had submitted her resignation request to chancellor Olaf Scholz, adding that “months of media focus on my person” had stood in the way of a factual debate about the military and Germany’s security policy.

“The valuable work of the soldiers and many people in my department must stand in the foreground,” she said.

Russia questions ‘dear’ James Cleverly on his support for ‘neo-Nazism’

Russia has asked British foreign secretary James Cleverly why he has supported “neo-Nazism” and the Kyiv administration just hours after sanctioning him.

“Dear James, you don’t understand. This is for the anti-Russian course and personal sanctions. But you still have to answer for the support of the Kyiv regime and neo-Nazism,” Russian foreign ministry spokesperson Maria Zakharova said yesterday.

Russia terms its invasion of Ukraine as a “special military operation” aimed at fighting “Nazism” but has targeted the former Soviet territory’s civilian infrastructure and citizens by indiscriminately shelling and bombing the country with missiles.

Shakhtar Donetsk will donate more than £20million of the transfer fee received for Mikhailo Mudryk to Ukrainian soldiers, my colleague Ben Burrows reports.

The 22-year-old forward joined Chelsea for £88m on Sunday after the Blues moved late to hijack a move to Premier League rivals Arsenal.

Shakhtar held out in negotiations for the biggest possible fee with a portion now set to go to “soldiers, defenders and their families” in the ongoing defence against the Russian invasion.