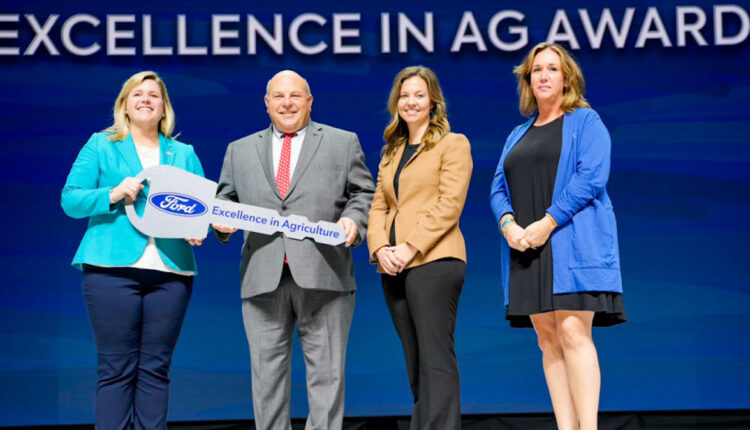 Stacie Anderson, of Wood County, won the Excellence in Agriculture Award, and Mike Hannewald, of Lucas County, won the Discussion Meet in the Young Farmer and Rancher competitions.

“Being on the stage was surreal,” Anderson said. “I felt confident leaving my top 10 round presentation, but had no idea how other finalists had done. It was truly a surprise when they called my name as winner.”

Anderson said attending the convention in Puerto Rico was an “incredible experience” because of the interesting location and also being able to travel with other Farm Bureau members from northwest Ohio.

“The competition was great, seeing each state send their best candidates forward for excellence, learning from my fellow competitors and getting to share my story was a really humbling opportunity,” she said.

Anderson is the agronomy sales manager for Legacy Farmers Cooperative, in Findlay, Ohio, where she manages sales of all crop nutrients, chemicals, seeds and precision products.

She grew up on her family’s farm in Bowling Green, where they raised corn, soybeans, wheat and specialty crops. She was active in 4-H and FFA. Anderson earned a bachelor’s in agribusiness and applied economics and master’s in agricultural communications from Ohio State University.

“For me, this achievement is about letting people like me, females and moms with an agriculture profession, know that you can still accomplish so much and be a great mom and grow your career,” Anderson said. “Ohio Farm Bureau has been such a great vehicle for me to be able to do that, and I hope that my success in this contest inspires someone else to take that chance too.”

The Discussion Meet simulates a committee meeting in which active discussion and participation are expected. Participants are evaluated on their ability to exchange ideas and information on a predetermined topic. The topics for the national contest were infrastructure and economic issues, supply chain issues, making Farm Bureau more accessible for farmers with off-farm jobs and climate initiatives.

Hannewald said he did extensive research and studying, as well as interviewing experts in the fields to prepare to talk about the topics.

“I prepared my main talking points that I wanted to bring to the table, but you also have to know something about the issue to adjust based on what the other competitors bring,” he said.

That’s what’s unique about the Discussion Meet. Competitors are judged on their knowledge of the topic and speaking ability, but also how well they can collaborate with the other competitors at the table to come up with solutions.

“It’s very practical, like when you have a committee meeting or sit on a board,” Hannewald said.

Hannewald grew up on his family’s farm, just outside of Waterville, Ohio, where his father was a crop farmer. He was also active in 4-H and FFA growing up. He earned a bachelor’s in agronomy from Ohio State University. He is an agronomist and precision farming adviser for Beck’s Hybrids.

Both contests were part of the Young Farmer and Rancher program, or at the state level, the Young Agricultural Professional program. The program is open to participants between 18 and 35.

For winning the national contest, Anderson and Hannewald received a $35,000 credit toward a new Ford vehicle and paid registration to the 2023 AFBF FUSION Conference in Jacksonville.

Up-to-date agriculture news in your inbox!

A Guide to Saving at the Store

Is this a bull run or a bull trap? Watch The Market Report live