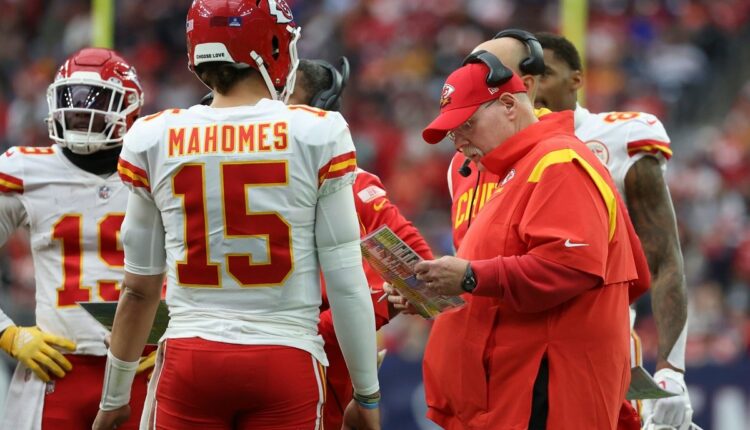 Only eight teams remain in the hunt for the NFL championship. The Kansas City Chiefs are the consensus favorite to win Super Bowl LVII at +300 odds, slightly ahead of the Buffalo Bills at +350.

The Chiefs (#1) and Bills (#2) are the top two seeds in the AFC and are widely considered the top two teams remaining in the postseason.

The Philadelphia Eagles (#1) and San Francisco 49ers (#2) are the top seeds in the NFC and round out the top four on DraftKings’ NFL futures board. The 49ers are +450 odds to win the Super Bowl as the third favorite on the board. Even though the Eagles are a #1 seed, they’re fourth on the board at +500 odds.

The top-seeded Chiefs host the #4 Jacksonville Jaguars on Saturday. The Chiefs are -8.5 favorites. On the other side of the AFC playoff bracket, the #2 Bills host the #3 Bengals in Orchard Park on Sunday. The Bills are -5 favorites.

The top-seeded Eagles square off against their NFC East rivals and the #6 New York Giants on Saturday. The Eagles are the biggest favorite on the board at -7.5. In a classic matchup between two historic NFC franchises, the #2 49ers host the #5 Cowboys on Sunday. The 49ers are -3.5 favorites.

The Chiefs are fresh off a bye week. The well-rested Chiefs are two wins away from another AFC Championship and returning to the Super Bowl for the third time in the last four seasons. Head coach Andy Reid and quarterback Patrick Mahomes know they can’t let championship glory cloud their brains, and they need to focus on one game at a time. The never-say-die #4 Jacksonville Jaguars visit Arrowhead Stadium.

The Chiefs saw their Super Bowl odds shorten from +350 last week to +300 this week. According to a projection from FiveThirtyEight, the Chiefs have a 25% chance to win Super Bowl LVII with only eight teams remaining.

The Bills defeated the #6 Miami Dolphins in the AFC wild-card round, 34-31, in a game that was much closer than anyone anticipated. The Bills squandered a 17-0 lead in the first half. At one point, the Dolphins jumped ahead 24-20 before the Bills rallied back to win.

The Bills advanced to the Divisional Round where they’ll host the Bengals. The two teams finally get to play each other after their previous meeting was suspended and canceled. Bills’ safety Damar Hamlin collapsed on the field and nearly died during their Week 17 matchup on “Monday Night Football.” Hamlin is out of the hospital and recovering, and the Bills want to win their next game in his honor.

In a battle between two NFC West teams, the 49ers picked off the Seattle Seahawks during Super Wild Card Weekend. Quarterback Brock Purdy didn’t look like a rookie when he tossed three touchdowns and rushed for another in a convincing 41-23 victory over the Seahawks.

The 49ers are +450 odds to win Super Bowl LVII, which are the shortest their odds have been all season. The 49ers have a 16% chance to win the Super Bowl, according to a projection from FiveThirtyEight.

The top-seeded Eagles are also fresh off a bye week, which was clutch because it provided quarterback Jalen Hurts time to rest his sore shoulder.

The Eagles defeated the Giants twice in the regular season and will attempt a 3-0 sweep when they square off in the Divisional Round. In Week 14, the Eagles crushed the Giants by 26 points. In Week 18, they rested most of their starters and still won by six points.

The Eagles are +500 odds to win Super Bowl LVII, which is a slight increase from +550 odds last week. FiveThirtyEight projects the Eagles have an 18% chance to win the Super Bowl.

The Cowboys went on the road and steamrolled the Tampa Bay Bucs in the NFC wild card, handing Tom Brady one of the ugliest losses in his stellar playoff career. Now, the Cowboys have to fly across the country to throw down against the 49ers in the Divisional Round.

The Cowboys were +2200 odds to win the Super Bowl in the preseason. They were as low as +700 odds after Week 13, but they ended the season at +1200 odds. You can back them at +800 odds to win their sixth Super Bowl and fourth championship for owner Jerry Jones.

The Cowboys have a 9% chance to win the Super Bowl, according to FiveThirtyEight.

The Cincinnati Bengals are the #3 seed in the AFC and the reigning AFC champions. They survived a close call against their divisional rival in the wild-card round. The Baltimore Ravens, without starting quarterback Lamar Jackson, lost the game on a freakish 98-yard fumble recovery.

Joe Burrow and the Bengals have a difficult path if they want to return to the Super Bowl in consecutive seasons. They’ll have to beat the #2 Bills this weekend, and probably the #1 Chiefs in the AFC Championship.

FiveThirtyEight projects the Bengals have a 9% chance to run the table with three more wins to claim their first-ever Super Bowl win.

The Giants pulled off a big road win against the #3 Minnesota Vikings during Super Wild Card Weekend. Not too many bettors were shocked at the victory because the Vikings were considered the most-overrated team this season.

The Giants face a true test on Saturday when they try to beat a divisional rival that’s had their number this season. Despite losing to the Eagles twice in the regular season, the Giants have a chance to knock out the #1 Eagles on Saturday.

The Giants are long shots to win the Super Bowl at +13000 odds when the season began. After defeating the Vikings, the Giants saw their Super Bowl odds jump from +5500 to +2500. They’re still considered a long shot though with the second-highest odds on DraftKings’ futures board.

FiveThirtyEight lists the Giants with a 1% chance of winning the Super Bowl.

The #4 Jaguars are this postseason’s Cinderella story. They stormed back from a 27-0 deficit against the Los Angeles Chargers to win their wild card matchup. It was such an embarrassing loss for the Chargers that they might fire their head coach.

The Jaguars hope they can continue their magical run with an upset over the #1 Chiefs in the AFC Divisional Round.

If the scrappy Jaguars defeat the Chiefs on their home turf, then anything will be possible for them, including a potential victory in Super Bowl LVII.

Ukraine news latest: UK may be about to take Russia conflict to next level – but key ally is wary of Moscow’s reaction