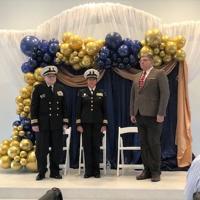 
Otto Randolph Vanderstay left the wild blue yonder to go over hill and dale to see the sea. Or something like that.

Family and friends honored Vanderstay Sunday evening with a retirement/birthday party at the Legacy in Jacksonville. He doesn’t like to tell his age, but he is now officially older than 89.

Most who know and love him call him Randy. He was born in 1933, the youngest of 14 children. He finished high school in Houston, and then attended the University of Texas in Austin.

In 1953, Vanderstay joined the United States Air Force, where he served for four years in active duty, and four more in reserve status. While in that branch of the military, he was stationed in Alaska.

He married in 1957, and he has two daughters, Natalie and Rochelle, who hosted Sunday’s event, along with his good friends, Cynthia and Howard Kline.

In 1976, Vanderstay decided he wanted to go back to military life, so he joined the US Army Reserves, serving in California as the Chief of Staff for the first Army medical brigade in California. He served in that branch of service until 1986.

Twenty or so years later, and now in his seventies, Vanderstay decided to join the USS Navy Sea Cadet Corps, where he has faithfully served until his retirement which was officially recognized in Sunday’s ceremony.

Young Sea Cadet members from SOC Stephen M. Mills Battalion, San Angelo, and Lone Star Squadron, Fort Worth, participated in the ceremony by seating guests, presenting a color guard and rifle presentation, and forming a military pathway for the entrance and exit of Lieutenant Commander Vanderstay.

A number of Sea Cadet Corps officials spoke at the gathering, giving accolades for the years of service Vanderstay has rendered the military.

“Randy has taught me a lot. He has been a source of wisdom, shared his knowledge of regulations and been an inspiration to hundreds of kids while giving the various trainings we do based on Navy jobs. He can be tough but sweet with kids. He is extremely capable. He loves people and is always willing to serve,” she said.

Daughters Natalie and Rachelle acknowledged that their dad is their hero, and jokingly laughed about having to stay in line because of the structured life he expected them to live based on his own military experience – but admitted he sometimes likes to bend the rules himself.

Lt. Anthony Loudicke with the Lone Star Squadron introduced the guest speakers, and presided over the ceremony, which was opened with an invocation by Pat Patterson, a color guard and flag presentation and singing of the National Anthem.

Jones, who is now the Area Commander for the Southeast and Puerto Rico Naval Sea Cadets, said the Chairman award is the highest award given in the Sea Cadets, and that Vanderstay is one of only two he knew of during his tenure who had earned that award.

Following the presentation of his retirement certificate, Vanderstay addressed the crowd of almost 100, expressing his gratitude.

“It is an honor and privilege to stand before you,” he said. “Because of the Naval Sea Cadet Corps, I have accomplished things I never thought I would do.”

Vanderstay continued by listing some of those things. At Pearl Harbor, he raised the American flag in a ceremony. He had scuba training in California. His squadron participated in the Junior Reserve Officer Training Corps (JROTC) in Florida.

A six-time cancer survivor, Vanderstay met his friends Cynthia and Howard Kline during one of the years Cynthia (Cindy) was directing the Relay for Life for Cherokee County. They have remained friends for the past twenty years.

“Having known Randy for the past twenty years, my only regret is not having known him sooner,” Kline said.

The trio has taken trips together over the years, along with other friends, and the most recent one was to Mt. Rushmore.

“After his last bout with cancer, I asked him what trip he had always wanted to take, but hadn’t yet,” Kline said. “He said he had never been to Mt. Rushmore, even though he has been all over the world. So, we went,” she said.

Although he has now retired from the military, the now-nonagenarian (look that up!) has a full-time job, driving all over the state to install the “Help, I’ve fallen and I can’t get up,” systems in homes for those who need that service.

He says he does it to “help the old people.”

Kudos to you, sir, and thanks for your service.

New York Manufacturing Activity Plunges to Lowest Since May 2020

Mental Health Apps Won’t Get You Off the Couch