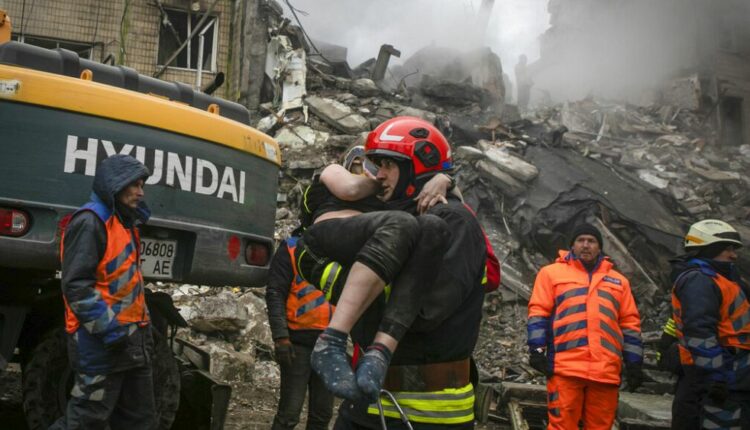 Authorities said earlier on Sunday that 10 Russian servicemen were injured in the blast in a cultural centre in the Belgorod region, which borders Ukraine and is the location of several Russian military bases and training grounds.

The 112 and Baza Telegram channels, which are associated with Russia’s law enforcement agencies, said the dead and injured were Russian conscripts who were called up to fight in Ukraine under Russia’s mobilisation drive, announced last September.

They reported that the blast occurred after a soldier mishandled a grenade in a local cultural centre that had been converted to store ammunition.

2. Hope fade for survivors in Dnipro

The death toll from a Russian missile strike on an apartment building in the southeastern Ukrainian city of Dnipro rose to 25 Sunday, President Volodymyr Zelenskyy reported as rescue workers scrambled to pull survivors from the rubble.

Emergency crews worked through the frigid night at the wrecked multi-story residential building, the site of the worst casualties from a widespread Russian barrage Saturday.

The attacks, which also targeted the capital, Kyiv, and the northeastern city of Kharkiv, ended a two-week lull in the airstrikes Russia has launched against Ukraine’s power infrastructure and urban centres almost weekly since October.

Russia fired 33 cruise missiles on Saturday, of which 21 were shot down, according to Gen. Valerii Zaluzhny, the commander-in-chief of the Ukrainian armed forces.

Zelenskyy reported that at least 73 people were wounded and 39 people had been rescued as of Sunday afternoon. The city government in Dnipro said 43 people were reported missing.

“Search and rescue operations and the dismantling of dangerous structural elements continues. Around the clock. We continue to fight for every life,” the Ukrainian leader said.

German weapons manufacturer Rheinmetall could deliver repaired Leopard 2 battle tanks to Ukraine in 2024 at the earliest, its chief executive was quoted as saying by Bild newspaper on Sunday.

It would also need a confirmed order to begin repairs

Germany announced earlier this month that it would provide Ukraine with 40 Marder infantry fighting vehicles to help repel Russian forces.

But Kyiv has also requested heavier vehicles such as the Leopards, which would represent a significant step-up in Western support to Ukraine.

Earlier this month, Economy Minister Robert Habeck said delivering the Leopard tanks could not be “ruled out”.

The German army has only around 350 Leopard 2 tanks today, compared to some 4,000 battle main tanks at the height of the Cold War.

Germany has become one of Ukraine’s top military supporters in response to Russia’s invasion after last year, overcoming a taboo that is rooted in its bloody 20th-century history on sending weapons to conflict zones.

Still, critics say German Chancellor Olaf Scholz and his ruling SPD are too slow, waiting for allies to act first instead of assuming Germany’s responsibility as the Western power closest to Ukraine.

This claim is disputed by Ukraine, which says its forces are still in the besieged salt-mining town in the dontesky region.

Speaking on Sunday the Russian leader said he hoped his soldiers would deliver more wins.

“The dynamic is positive,” Putin told Rossiya 1 state television when asked about the taking of Soledar. “Everything is developing within the framework of the plan of the Ministry of Defense and the General Staff.”

“And I hope that our fighters will please us even more with the results of their combat,” Putin said.

If Russia is indeed in control of Soledar it would represent a war success for Moscow, following months of battlefield setbacks.

Putin now casts the war in Ukraine as an existential battle with an aggressive and arrogant west, and has said that Russia will use all available means to protect itself and its people against any aggressor.

The United States and its allies have condemned Russia’s invasion of Ukraine as an imperial land grab, while Ukraine has vowed to fight until the last Russian soldier is ejected from its territory.

**5.**Britain to send 14 of its main battle tanks to Ukraine

Prime Minister Rishi Sunak’s office said late on Saturday that Britain would send 14 of its main battle tanks to Ukraine, amid criticism from the Russian Embassy in London.

A squadron of 14 Challenger 2 tanks will go into the country in the coming weeks and around 30 self-propelled AS90 guns, operated by five gunners, are expected to follow, the British prime minister’s office said in a statement.

The UK will also begin training Ukrainian forces to use the tanks and guns in the coming days.

“As the people of Ukraine approach their second year living under relentless Russian bombardment, the Prime Minister is dedicated to ensuring Ukraine wins this war,” a spokesperson for the prime minister said in a statement.

“Alongside his closest military advisors, he has analysed the military picture, looked at the strategic impact of the UK’s support and identified a window where he thinks the UK and its allies can have maximum impact.”

Sunak’s office said earlier this week that Britain would coordinate its support with allies after Germany, France and the United States — all indicated last week they would provide armoured vehicles to Ukraine.