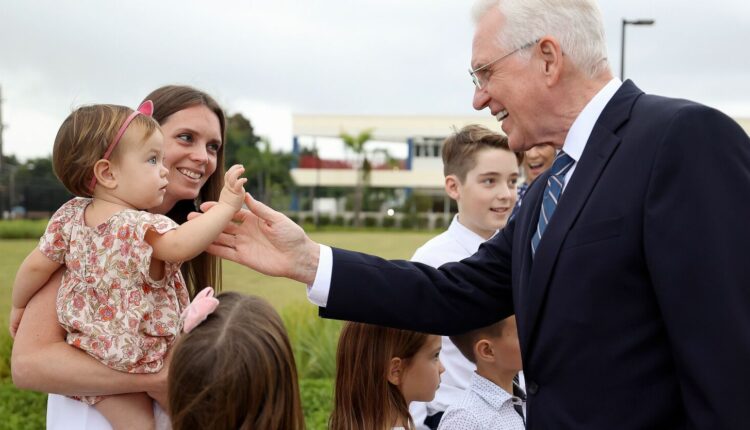 A physician who was born in Puerto Rico and raised on the mainland, Maldonado-Perez returned to the island to assist with Maria recovery efforts after the storm.

Inspired by the locals’ resilience, she never left.

“I have met the most amazing people on this island,” she said. “They love so hard.”

It has been more than 5 years since the Sept. 2017 storm — one of the worst disasters to ever strike the Caribbean — left this island territory with prolonged periods of water and power outages and extensive damage. She spoke of the young mother who etched “SOS” in the sand seeking help for her infant, of the guitar maker who continued his trade after the “ocean came into his house,” and of the children who had sent artwork as a symbol of their support.

Looking at a new temple for The Church of Jesus Christ of Latter-day Saints, she recalled the day she learned a temple would be built in San Juan.

The temple’s timing was important.

‘You are not forgotten’

After hard-fought Maria recovery efforts, the island also endured a series of other challenges and catastrophic events — including Hurricane Fiona, two magnitude 6.0 earthquakes in 2019 and 2020 and the COVID-19 pandemic.

The announcement of the temple brought both joy and relief, Maldonado-Perez added. “It was like the last first responder giving someone mouth to mouth. It was the jolt we needed.”

It was also a powerful message: “You are not forgotten.”

Elder D. Todd Christofferson of the Quorum of the Twelve Apostles dedicated the new temple Sunday — a hot, humid day.

“The temple will bless this island,” Elder Christofferson said. “It has had a lot of challenges in recent years; natural disasters and other kinds of difficulties that have been serious and caused a lot of destruction. It will make a difference.”

“This will bring what we need,” Elder Alvarado said. “Puerto Rico needs joy, it needs happiness. There is so much beauty around us, but now with the temple, people can have hope of a better Puerto Rico.”

‘We live in the hurricane avenues’

While recovery is well underway in Puerto Rico, The Church of Jesus Christ of Latter-day Saints continues to partner with local humanitarian organizations to help those who continue to struggle.

Located on the other side of the island from San Juan, over windy roads, amid now-lush green landscapes, the city Aibonito cares for some 800 elderly and vulnerable residents with the help and support of The Church of Jesus Christ of Latter-day Saints and Project Hope. The organizations have also partnered to help the El Campito senior center in Aibonito, where their new water filter makes the water safer for cooking and drinking.

Ivelisse Colón, the mayor’s assistant and leader for the service community in Aibonito, said Hurricane Fiona in September 2022 brought a lot of rain, and recovery has been harder for the elderly. The city is working to have its residents be more prepared for the next storm.

“It’s important because we live in the hurricane avenues. That’s our reality, Aug. 1 to Nov. 30,” she said. “We have to have a mindset to deal with disasters, to take the reserves that organizations like yours and others bring to us to teach the people to be able to deal with a disaster in their own homes.”

Working together with the church and nonprofit organizations is crucial, said Colón, and the city of Aibonito is modeling the way for other cities on the island.

“Government has the power and the will to reach people and communities, but without the organizations that help us, we cannot reach the quantity of persons and families,” she said.

While many are preparing for future disasters physically, Latter-day Saints say they have been preparing spiritually for the temple for many years.

The San Juan Puerto Rico Temple features a domed spire rising over the temple entrance. The 7,000 square foot temple — which sits on a little less than three acres of ground — is the first Elder Christofferson has dedicated.

The interior glass patterns were inspired by the quatrefoil motifs also found in Spanish colonial architecture. Similar patterns are repeated in ordinance-room fabrics and the patterns on the tile floor, using the colors blue, gold, opal white and green. Some of the artwork resembles the very views of the trees in mountains leading down to the beach. And many paintings throughout the temple depict the Savior Jesus Christ.

Sister Kathy Christofferson said the local decor shows her how the Lord loves His people.

“Each temple is so very specific in its decoration to resonate with the people who live in that location,” she said. “Whenever you walk into a temple, you will feel that the Lord is saying, ‘This is the house of the Lord, this is my house, but I want you to come home. That’s what He’s trying to tell us.’”

Elder Christofferson, who conducted the entire meeting in Spanish, has been to Puerto Rico many times for business and church assignments.  “I feel like I have a history here,” he said. “That is special to me for that reason. But to be here for this crowning moment when a temple is dedicated, who could ask for more?”

Gavin Nelson recently returned from serving in the Puerto Rico San Juan Mission of The Church of Jesus Christ of Latter-day Saints. The grandson of President Russell M. Nelson, he shared his mission call with his grandfather via video conferencing. President Nelson promised Gavin Nelson that his work would help prepare Puerto Rico for the temple.

While attending the dedication, he listened as church leaders said that the nation and people were “prepared and ready” for the temple. “It was the full circle moment I didn’t realize I was waiting for,” he said.

Nivea Rebecca Fraticelli received a copy of the Book of Mormon in 1963. She read it cover to cover in 24 hours. She was baptized at Escambron Beach in Old San Juan, becoming the first native Puerto Rican to join The Church of Jesus Christ of Latter-day Saints.

She has waited almost 60 years for a temple to bless Puerto Rico.

Fraticelli wrote a history of the church in Puerto Rico from 1950 to 2000. “Thanks to the faith of those first members in Puerto Rico, today we have a chapel in almost all the municipalities and in many of the islands in the sea,” she said.

Paola Lespin, 18, a third generation Latter-day Saint, had never entered a temple before the Puerto Rico Temple open house. Now, she added, “I get to finally experience for myself what I have always heard about.”

At age 17, Dorany Rodriguez-Baltazar moved to Utah from Puerto Rico. Returning to the territory to attend the dedication and reconnect with local members. “It is like you never left,” she said.

Referencing the hardships of the last five years in Puerto Rico, she added, “even though they have been through so many things they are so resilient.”

The new temple is a symbol, she said, that the future of Puerto Rico is sure. “That is why we are crying so much. This is something we have been praying for since we were little. We wanted to have a temple here.”