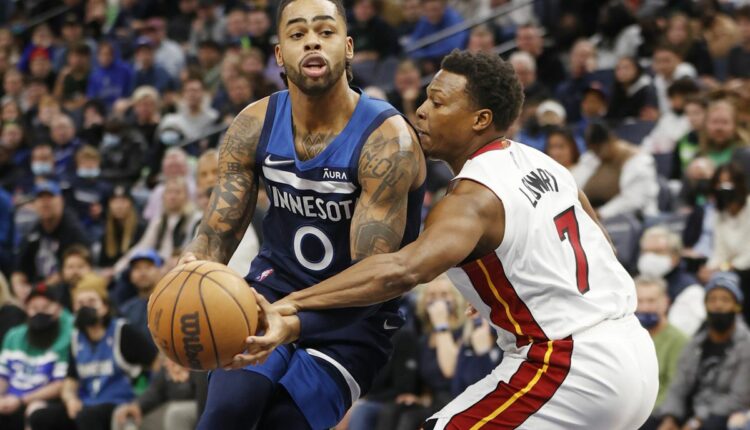 In an effort to bolster their roster prior to the upcoming trade deadline, the Miami Heat expressed interest in acquiring point guard D’Angelo Russell from the Minnesota Timberwolves.

Russell, the former #2 pick from the 2015 NBA Draft, is in the final year of his contract worth $31.3 million. He wants to remain in Minneapolis with the Timberwolves, but contract extension discussions fell apart.

Russell has an expiring contract, which makes him a popular trade candidate for teams seeking a salary dump. However, in the case of the Heat, they want to add a playmaker before the Feb. 9 trade deadline.

With a 24-20 record, the Heat are in seventh place in the Eastern Conference standings, but occupy first place in the Southeast Division. If the season ended today, the Heat would be headed for the Play-In Tournament. The Heat need an additional scorer and someone who could remain healthy in the postseason, which is why they’re interested in adding Russell in a trade.

The Timberwolves are 22-22 this season and hold down seventh place in the Western Conference standings. They’re currently in second place in the Northwest Division, but trail the first-place Denver Nuggets by 8.5 games. The Nuggets are running away with the Northwest crown with a conference-best 30-13 record. Out of six NBA divisions, the Nuggets have the shortest odds to win their division at -2000. The Timberwolves are longshots to claim a Northwest title at +5500 odds.

The Timberwolves are on the postseason bubble with the Trail Blazers, Jazz, and Thunder. If the season ended today, the Timberwolves would return to the Play-In Tournament for a second season in a row.

The Timberwolves were only +3300 odds to win the 2022-23 NBA championship at the start of the season, but now they’re a long shot at +18000. They were a popular pick to win the title last summer after acquiring Rudy Gobert in a huge trade with the Jazz. However, the Gobert struggled to adapt to his new team and the Timberwolves did not make a huge leap as they intended. They’re in the same spot as they were last season.

The Timberwolves miscalculated on their attempt to install a “Twin Towers” frontline in the Twin Cities by starting a pair of seven-footers with Gobert and Karl-Anthony Towns. Towns has been out since late November with a calf injury, and there’s no update on his return. They went 12-11 without Towns in the lineup.

Russell struggled since Gobert joined the team, and his major statistics are down from previous season. He averages 17.0 points, 6.2 assists, and 3.1 rebounds per game. His 3-point shooting percentage improved from 34% to 36.2% this season, but he’s attempting almost two fewer 3-pointers per game.

Veteran Kyle Lowry has been plagued with injuries since joining the Heat last season. He missed 19 games in 2021-22, but a hamstring injury slowed him down in the postseason. The Heat were eliminated in the Eastern Conference Finals by the Boston Celtics in seven games. Heat fans are not shy expressing their belief that they would’ve defeated the Celtics and returned to the NBA Finals for a second time in three seasons if Lowry was not injured.

Lowry only missed eight games in the first half of the season, but the 36-year-point guard endured significant wear-and-tear on his body during his 17-season career. It’s only a matter of time before he breaks down again.

Lowry averages 13.1 points and 5.6 assists per game this season, but it’s his lowest output in over a decade.

If the Timberwolves do not want to swap point guards, then the Heat will have to find a third team to take Lowry off their hands.

The Washington Wizards and Utah Jazz could be potential landing spots for Russell if a trade with the Heat does not work out.