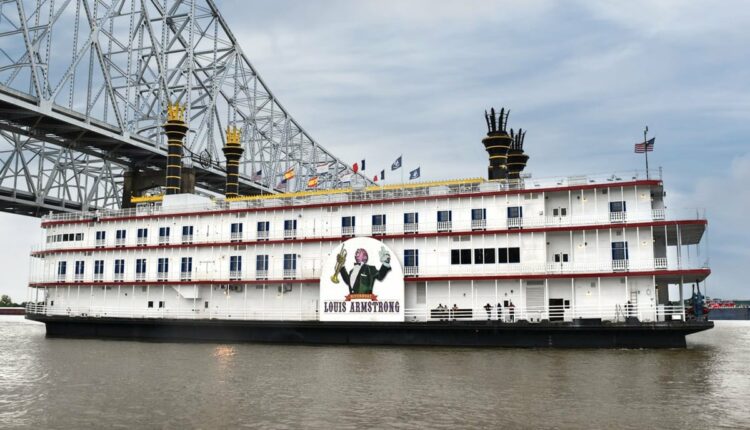 Indiana’s first casino is now on the market for $16M. Casino Aztar opened on Dec. 8, 1995 and became a floating fixture on the Ohio River shoreline in downtown Evansville for the next 20 years. Since 2019, it has operated in New Orleans as the Riverboat Louis Armstrong, a monument to the town’s best-known native jazz trumpeter.

“The boat is beautiful, and we have about $14 million invested in it,” Warren Reuther told Casino.org. He’s the president and CEO of Hospitality Enterprises New Orleans/BigEasy.com, which purchased the riverboat in 2017.

“We bought it for entertainment and also conventions,” Reuther said, “The boat was docked right behind the convention center. But New Orleans has slowed down quite a bit with conventions, and we decided that ’23 was not going to be a good year for conventions in New Orleans.”

The Casino Aztar became Indiana’s first casino under riverboat gaming legislation passed in November 1993. Officially named the “City of Evansville,” it was opened by the Aztar Corporation, a Phoenix-based hospitality organization formed during a 1989 restructuring of Ramada Inn, Inc.

More than 200 employees of Jeffersonville, Ind.’s Jeffboat spent more than a year constructing the 310-foot vessel. Its exterior was designed by RA Stern, Inc. as a replica of the historic Robert E. Lee racing sidewheel steamboat. The interior, by Morris & Brown Architects, Ltd., was pure Las Vegas glitz.

When the riverboat casino opened, it packed 1,100 slots and 60 blackjack and poker tables into its 38,000 square feet of gaming space. It could accommodate 2,700 guests.

In January 2007, Kentucky-based Columbia Sussex Corp acquired the riverboat. Less than a year later, to avoid bankruptcy, it sold it to Reno, Nev.-based Eldorado Resorts, as part of a $245M deal that  also included the casino’s 350-room hotel, parking lot, and a shopping pavilion. In 2013, Casino Aztar became Tropicana Evansville, a name-change aligning with its new parent company.

After initially drawing about 2 million guests per year, the casino riverboat saw its attendance decline as more casinos opened in Indiana and nearby states. By fiscal year 2017, about 1.15 million guests boarded the Tropicana Evansville, according to Indiana Gaming Commission reports.

After 22 years of continuous operation, the floating casino closed on Oct. 16, 2017. It was sold to Texas Slots & Gaming Boat Purchase, which in turn resold it to Reuther’s company. (Through another company, New Orleans Paddlewheels, Reuther once owned half of the Queen of New Orleans riverboat casino. Hilton Gaming Division owned the other half.)

“The casino boats that we looked at before this were terrible,” Reuther said. “They were not built to be boats. They were built to be a casino that floated. But this was different.”

Before the riverboat could be towed to its new home in Louisiana, modifications were required. More than 900 gaming machines were removed and its 98-foot smokestacks – too high for some bridge clearances en route – were temporarily disassembled.

In Louisiana, Reuther’s company performed $10M in renovations. Its interior was entirely gutted rebuilt, with brand new floor plans that upped the boat’s occupancy to 3,000.

On Dec. 14, 2019, the former Casino Aztar was rechristened the Riverboat Louis Armstrong. Until last month, it has functioned as a nightclub and a venue space for jazz concerts, conventions, parties, and weddings. Docked at Hilton Riverside/Riverwalk, it is licensed to accommodate 3,000 passengers.

“We’ll open it back up if the convention business picks up again,” Reuther said. “But, for now, it’s available to anyone who wants a beautiful entertaining boat that can be dockside.”