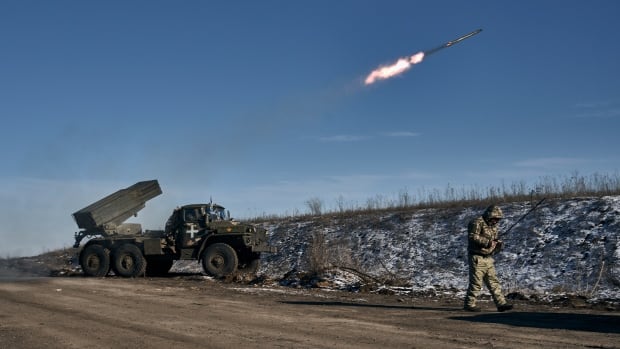 
Ukraine’s ambassador to Canada says she thinks there has been a breakthrough in the supply of weapons being shipped to her embattled country, as Canada prepares to send a major air defence system and other allies provide more arms.

“I would call it the ice breaking, because a lot of kind of the weapons that the government of our partners and allies are supplying us now, we have been asking [for] since February 24,” Yulia Kovaliv said in an interview on Rosemary Barton Live airing Sunday.

The United Kingdom recently announced it would send battle tanks to Ukraine, while Germany is facing pressure to make a similar commitment. Canada announced this week it would buy a National Advanced Surface-to-Air Missile System (NASAMS) for Ukraine, at a cost of $406 million.

“These are the clear signals that our partners and allies are standing firm with the Ukraine, as they’ve declared steadfast support, whatever it takes for as long as it takes,” Kovaliv said.

The war in Ukraine is just over one month away from a full year of conflict. While Ukraine has been able to recapture much of the territory taken by Russia in its initial invasion, Russia controls significant parts of the south and east, where fighting continues.

Russia has argued that the supply of weapons to Ukraine by North American and European countries marks an escalation in the war. Russia itself recently shook up its military command, and Ukrainian intelligence claims the country could soon mobilize half a million new conscripts.

Canada’s announcement of the purchase of an air defence system comes as an intense Russian airstrike campaign targets Ukrainian electricity infrastructure. A Russian missile attack on an apartment building in Dnipro, meanwhile, killed upwards of 23 people, as the death toll continues to climb Sunday.

“NASAMS is one of the best-in-the-world air defence system and we do value this big support from the Canadian government,” Kovaliv said.

The air defence system Canada is set to purchase is not yet in place. The head of Raytheon Technologies, one of the companies that produces NASAMS, has said it takes about two years to produce the system.

But Defence Minister Anita Anand told Barton in a separate interview airing Sunday that Canada was targeting a shorter timeline, noting they had purchased both the system and munitions at the same time.

The delivery “will occur as soon as possible, may involve multiple shipments and will be delivered as soon as possible…. We are not contemplating years at this point,” Anand said. She added that a close partnership with the United States was a key factor in the purchase.

“We are working all together and we are hoping that it will be coming as soon as it is physically possible and what assurance we’ve got that the Canadian government from our side and from U.S. will put all the efforts to deliver it as quickly as as it possible,” Kovaliv said.

Anand said she remained focused on procuring equipment for the Canadian military even as the government moves to support Ukraine.

“There’s no question that we are examining capabilities that are needed across the board, including the Canadian Armed Forces,” she said.