Robeco Institutional Asset Management B.V. reduced its holdings in Burlington Stores, Inc. (NYSE:BURL – Get Rating) by 62.8% during the 3rd quarter, according to the company in its most recent 13F filing with the Securities & Exchange Commission. The firm owned 1,729 shares of the company’s stock after selling 2,924 shares during the period. Robeco Institutional Asset Management B.V.’s holdings in Burlington Stores were worth $194,000 as of its most recent SEC filing.

Burlington Stores (NYSE:BURL – Get Rating) last announced its quarterly earnings data on Tuesday, November 22nd. The company reported $0.43 EPS for the quarter, missing analysts’ consensus estimates of $0.52 by ($0.09). The firm had revenue of $2.04 billion during the quarter, compared to the consensus estimate of $2.05 billion. Burlington Stores had a net margin of 1.94% and a return on equity of 37.58%. During the same quarter in the previous year, the business posted $1.36 earnings per share. Sell-side analysts anticipate that Burlington Stores, Inc. will post 4 earnings per share for the current fiscal year.

In other Burlington Stores news, CAO Jeffrey Laub sold 2,917 shares of the company’s stock in a transaction dated Monday, November 28th. The shares were sold at an average price of $195.63, for a total transaction of $570,652.71. Following the transaction, the chief accounting officer now directly owns 3,165 shares in the company, valued at approximately $619,168.95. The transaction was disclosed in a filing with the SEC, which is accessible through the SEC website. 0.52% of the stock is owned by company insiders. 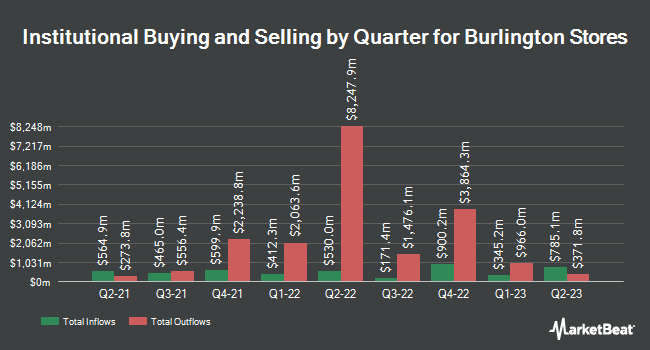 Before you consider Burlington Stores, you’ll want to hear this.

MarketBeat keeps track of Wall Street’s top-rated and best performing research analysts and the stocks they recommend to their clients on a daily basis. MarketBeat has identified the five stocks that top analysts are quietly whispering to their clients to buy now before the broader market catches on… and Burlington Stores wasn’t on the list.

While Burlington Stores currently has a “Moderate Buy” rating among analysts, top-rated analysts believe these five stocks are better buys.