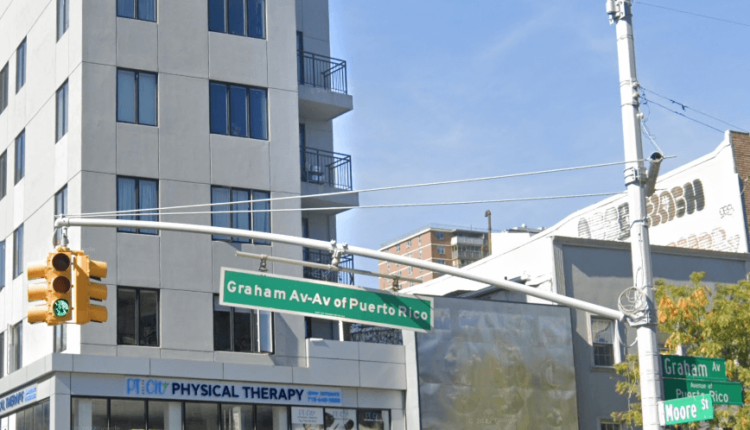 
Williamsburg residents awoke to a surprise today: The “Graham Ave-Ave of Puerto Rico” street sign that hangs above traffic on corner of the busy thoroughfare and Moore Street was removed and replaced with a sign simply reading “Graham Ave.”

Alarm spread on social media after Instagram account Nuevayorkinos, a digital archive that documents New York City Latino and Caribbean culture and history, shared photos from another Instagram account of the sign’s removal, alongside a comment saying they were dumbfounded and hurt by the action. “As y’all know, we do this work because we love our city, her barrios, and our communities. Things like this hurt. Bad,” the comment read.

“Often, many of us native to gentrifying neighborhoods (in NYC and across the country) are asked why we oppose it so much. For us, it’s never been about the movement of people, as humans are migratory species by nature. It is, however, and always will be about the colonialism that accompanies its ushering into our streets.”

The post also referred to a 2013 Gothamist story titled Who’s Trying to Erase East Williamsburg’s “Avenue Of Puerto Rico?” in which developer Michael Schlegel, whose business is based at 550 Grand Street nearby, was quoted as saying: “It’s becoming a very hot area, and the people from Williamsburg are moving further out, and they don’t want it to be known as a Puerto Rican or Spanish area anymore,” he said. “I think it would help the image of the area.”

The crisis was averted hours later, when the Department of Transportation restored the sign with its original name and said the whole situation was a mix-up. On Twitter, DOT wrote: “An overhead sign on Graham Ave in Brooklyn was mistakenly removed this morning. The proper Graham Ave-Ave of Puerto Rico sign has been reinstalled (photo taken this afternoon) and will remain. Thank you to the members of the community who brought this to our attention.”

However, a number of commenters on the Twitter thread questioned whether it was a mistake at all and why the street sign was removed in the first place.

Brownstoner reached out to DOT to find out why the sign was removed and whether it was the only one taken down, but did not hear back by time of publication.

In an Instagram post celebrating the reinstallation of the original sign, Nuevayorkinos wrote: “And just like that, we’re back! Video from @teampuertoricoo. Wondering if actions can be put in place to protect all culturally specific street namings/heritage sites? We have to make sure that as our communities’ demographics and landscapes change, that our culture, heritage, and contributions to our neighborhoods aren’t erased. That is what we mean when we talk about gentrification as colonialism: our impacts, our histories, our legacies being silenced.”

DeFi was the most attacked ecosystem in 2022: Finance Redefined

Real estate in Canada: Do you qualify for a capital gains exemption?