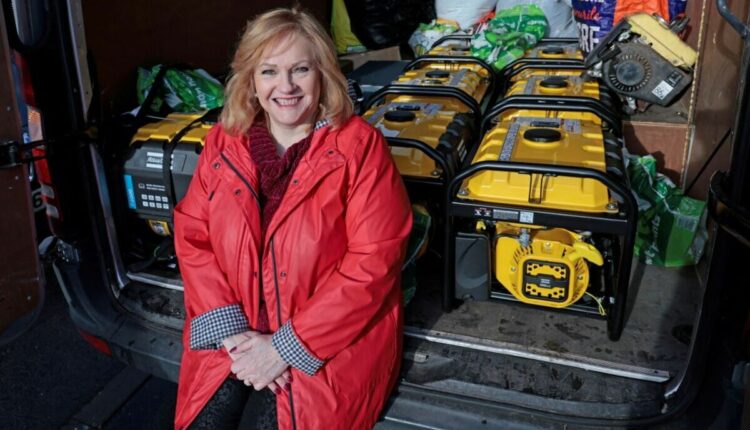 
They are facing temperatures as low as -10C with their electrical supply hammered daily by Moscow’s war machine.

One charity typical of those sending vital supplies is the Healing Hands Network in Warwickshire, which dispatched its third vanload on Monday.

Inside were eight generators costing £475 apiece and each able to generate enough energy to power a modestly equipped house. Also packed into the van were food, warm clothing and other necessities.

Sue Stretton, Healing Hands’ chief executive, said: “We were hoping we’d raise enough for 16 of these generators but these eight units will make a massive difference.

“They were donated by a gentleman who raised almost £4,000 just among his friends, relatives and neighbours in Pershore, Worcestershire.”

Sue, 68, from Coventry, accompanied her last aid mission to Lviv in November and saw the difference made by the supplies they delivered.

She said: “We visited an orphanage for three to six-year-old children. There were about 20-30 boys and girls… There was one little girl who could not stop crying and calling for her mummy. She was only three and we were told she had lost both parents in an air strike a few days earlier.”

He said: “One generator can get the water pump working, it can power a TV and a stove. It can provide a village with clean water, hot food and drink, power to charge flashlights and phones.

“We also have Starlink equipment which means people can access the internet and contact their loved ones.

“One of the most important things a generator can do is power a television so people can have access to vital information.

“For many in the east the only access to news they have is Russian propaganda on their radios. The Russians tell them that half of Ukraine has been invaded and occupied. So almost as important as clean water is real information about what is going on.”

He added: “We are working with around six British charities like Healing Hands sending us generators, food, warm clothing, medical supplies.

“We make sure it gets to the places where it is needed most. It is true we need thousands of generators but this aid is making a big difference and we are thankful for it.”

The van was being driven by volunteers Steve Grayson, 54, and Tomasz Podpora, 38.

He said: “I developed PTSD in 2010 and Healing Hands have helped me massively in my recovery so it is only right I should help them out now.”

Last year the charity delivered three ambulances packed with medical supplies to Lviv and have also donated a truck and Land Rover Defender.

Their next project is to deliver a two-tonne generator donated by a firm in Liverpool.

It will be delivered by another charity, UK to Ukraine, and plans are in place for it to provide power and heating to a hospital.