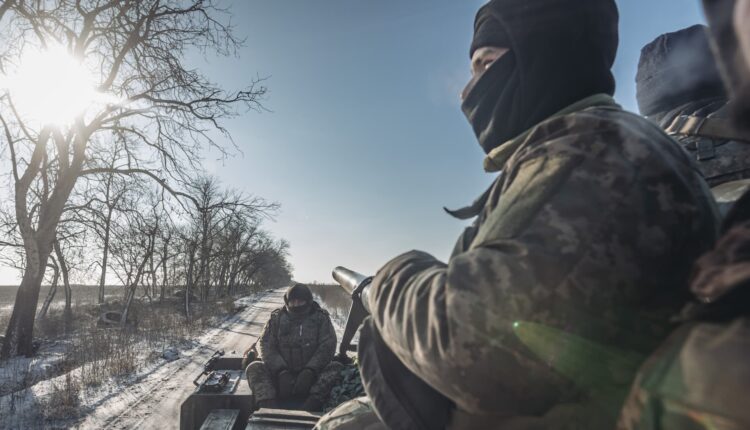 
Ukraine tight-lipped about Soledar’s fate, says forces are holding out

Ukraine has not conceded defeat in Soledar in Donetsk, a town that Russia’s mercenary paramilitary group, the Wagner Group, claims to now fully control.

Ukraine’s President Volodymyr Zelenskyy did not comment on the salt-mining town’s fate in his nightly address Tuesday, only thanking Ukrainian forces who have been defending Soledar, saying:

“I thank everyone who helps us defend Ukraine and freedom, fights for independence and works to strengthen Ukraine! Today I’d like to pay special tribute to the warriors of the 46th separate airmobile brigade for their bravery and steadfastness in defending Soledar! Thank you, warriors!”

Ukrainian Presidential Advisor Oleksii Arestovych said Tuesday that Soledar was “semi-surrounded, if we look at open sources it looks like this: the western parts are [taken] by the enemy, but the center and northwest, and southwestern parts [of the city] are standing,” in YouTube in comments translated by NBC News.

“Heavy fighting is going on to hold Soledar. The enemy does not pay attention to the heavy losses of their personnel and continues an active assault. The approaches to our positions are simply strewn with the bodies of dead enemy fighters,” Maliar said.

The head of the Russian private military company, the Wagner Group, which is predominantly fighting in the area around Bakhmut in Donetsk, has claimed that his fighters have completely taken control of the strategically important salt mining town of Soledar.

“Units of the Wagner PMC [private military company] have taken control of the entire territory of Soledar. The city center has been surrounded, and urban warfare is under way. The number of prisoners will be announced tomorrow,” Yevgeny Prigozhin, the founder and head of the Wagner Group, said in a statement Tuesday released on Telegram and translated by Russian state news agency Tass, accompanied by an image of fighters in what could be an underground mine. The Wagner Group is a paramilitary group of mercenaries fighting alongside Russia’s regular units.

Yevgeny Prigozhin, a Russian businessman and close ally of Vladimir Putin. He recently admitted to creating the Wagner Group, a private military company fighting in Ukraine, in 2014.

Prigozhin has achieved a much higher-profile since Russia invaded Ukraine and his Wagner fighters joined in Russia’s war effort. He previously denied links to the paramilitary group that he founded in 2014 in order to support pro-Russian separatists in eastern Ukraine.

Since admitting founding the group, however, he has been keen to capitalize on their relative successes on the battlefield. Yesterday, Prigozhin commented, “Once again, I want to emphasize that no units except for the fighters of the Wagner PMC took part in the assault on Soledar.”

The ruins of the salt mine damaged by Russian shelling in Soledar in the Donetsk region of the Donbas.

On Tuesday, Britain’s Ministry of Defense said it believed that Russian and Wagner forces were likely in control of most of Soledar after “tactical advances” in the last four days. A Ukrainian official said yesterday that Russia had concentrated the best fighters from the Wagner Group in Soledar.

Ukraine’s government has been largely tight-lipped about Soledar’s fate, with President Volodymyr Zelenskyy not commenting on the town’s status in his nightly address and one official saying the city was only “semi-surrounded.”

Ukrainian President Volodymyr Zelenskyy thanked allies for their renewed commitment to give his country more weapons, but called for a “new level of modern military equipment.”

“It is even more important now when Russia is gathering forces for another escalation,” Zelenskyy said during a nightly address on his official Telegram channel.

“The free world has everything necessary to stop Russian aggression and bring the terrorist state to a historic defeat and it is important not only for us, it is important for global democracy, for all those who value freedom,” Zelenskyy added.

A Russian soldier walks amid the rubble in Mariupol’s eastern side where fierce fighting between Russia/pro-Russia forces and Ukraine on March 15, 2022.

“The scale of destruction is enormous,” Shmyhal said on his official Telegram channel.

He added that the “Ukraine Recovery Program will become the largest reconstruction project since the Second World War. We have already identified four key sources of its funding.”

The best fighters from Russia’s paramilitary group, known as the Wagner Group, have been deployed to fight in Soledar in Donetsk in eastern Ukraine, where Russian forces have made tactical gains in recent days.

Serhiy Cherevaty, spokesman for Ukraine’s eastern forces, told local TV channel 24 that Russian forces were deploying their best Wagner fighters at Soledar, which had been struck 86 times by artillery over the past 24 hours.

Russia is believed to see the capture of Soledar as a step toward its bigger target, that of capturing Bakhmut in Donetsk where fighting has been intense for months.

The Wagner Group is a private military company whose forces are fighting alongside Russia’s standard military units. Wagner fighters have been privately recruited and the group is estimated to be around 50,000-men strong. Many of the servicemen have been recruited from Russian prisons having been offered the chance to fight in Ukraine in return for pardons. Some Wagner fighters have reportedly already received pardons having fulfilled their military contracts.

“This is basically not a 21st-century war,” Cherevaty said, according to comments on Youtube translated by NBC News.

“Currently, the hottest spot in the Bakhmut direction is Soledar. There are fierce battles now, and the enemy has concentrated there the best units of the … ‘Wagner’ group [there], which are supported by the regular armed forces of the Russian Federation. Fierce battles are ongoing there. The enemy is trying to seize this Ukrainian city at any cost,” he said.

Ukrainian soldiers near a stele with a Ukrainian flag and a handwritten inscription that reads: “Bakhmut is Ukraine” on Jan. 4, 2023, in Bakhmut, Donetsk Oblast, Ukraine.

On Tuesday alone, Cherevaty said that 86 instances of shelling had been recorded around Soledar and surrounding settlements. Ukraine’s President Volodymyr Zelenskyy said Monday night that hardly any walls were left standing in Soledar and that Russian corpses covered the landscape.

“What did Russia want to gain there? Everything is completely destroyed, there is almost no life left. And thousands of their people were lost: the whole land near Soledar is covered with the corpses of the occupiers and scars from the strikes,” Zelenskyy said.

Russia, as we know it, may not survive the coming decade and risks becoming a failed state as it pursues its costly war in Ukraine, according to a survey of global strategists and analysts.

Russian President Vladimir Putin chairs a meeting of the Council for Strategic Development and National Projects, via video link at the Novo-Ogaryovo state residence outside Moscow, Russia December 15, 2022.

One of the poll’s most surprising takeaways, according to the American think tank, was that respondents pointed to a potential Russian collapse over the next decade.

This was “suggesting that the Kremlin’s war against Ukraine could precipitate hugely consequential upheaval in a great power with the largest nuclear-weapons arsenal on the planet,” the Atlantic Council noted.

Read more on the story here

In the last four days, Russian forces and their colleagues in the Russian private military company known as the Wagner Group have made “tactical advances” into the small Donbas town of Soledar, according to the latest intelligence update from Britain’s Ministry of Defense.

Soledar is around 6 miles north of Bakhmut, the capture of which likely continues to be Russia’s “main immediate operational objective,” the ministry noted.

Despite recent advances into Soledar and “increased pressure” on nearby target Bakhmut, the ministry said “Russia is unlikely to envelop the town imminently because Ukrainian forces maintain stable defensive lines in depth and control over supply routes.”

A Ukrainian multiple-launch rocket system is hiding among the trees near Soledar as the fighting in the Donbas region continues.

The ministry noted that “Russia’s Soledar axis is highly likely an effort to envelop Bakhmut from the north, and to disrupt Ukrainian lines of communication.”

“Part of the fighting has focused on entrances to the 200km-long disused salt mine tunnels which run underneath the district. Both sides are likely concerned that they could be used for infiltration behind their lines.”

On Monday night, Ukraine’s President Volodymyr Zelenskyy said that while Russian forces “have now concentrated their greatest efforts on Soledar, the result of this difficult and long battle will be the liberation of our entire Donbas.”

He conceded, however, that the fighting was “extremely difficult” around Soledar, a place where he said there were barely any walls left standing.

“Due to the resilience of our warriors there, in Soledar, we have gained additional time and additional power for Ukraine,” he said in his nightly address.

“And what did Russia want to gain there? Everything is completely destroyed, there is almost no life left. And thousands of their people were lost: the whole land near Soledar is covered with the corpses of the occupiers and scars from the strikes.”