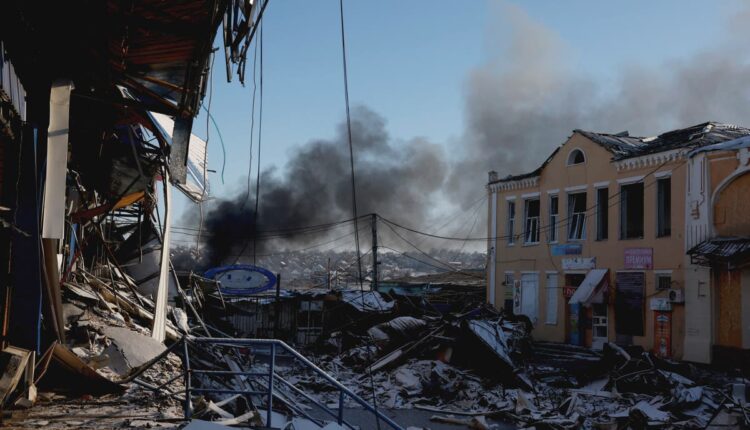 Russian soldiers are stepping over the bodies of soldiers from their own unit in the war in eastern Ukraine where the battle has picked pace, especially in Soledar and Bakhmut, as Moscow has poured in more fighters with help from Wagner group.

A critical swathe of land in the industrial Donbas region, Soledar has seen a bitter fighting between soldiers from Ukraine and Russia along with some of their heaviest losses in the warfare.

Fighting in Bahkmut and Soledar is “the most intense on the entire frontline”, with little advancement by either side in the freezing conditions, said Ukrainian military analyst Oleh Zhdanov.

He added: “So many (pro-Russian fighters) remain on the battlefield … either dead or wounded.”

Senator: Ending US aid to Ukraine would be historic mistake

The U.S. would risk enabling the spread of extremism in Europe if it stopped providing support to Ukraine in its war with Russia, Maine’s independent senator said Monday in the wake of meeting with Ukrainian President Volodymyr Zelenskyy.

Sens. Angus King of Maine and Jack Reed of Rhode Island, who sit on the U.S. Senate Committee on Armed Services, traveled to Kyiv last week to meet with Zelenskyy. King said he came back more certain that U.S. aid to Ukraine is vital.

Ukraine is slated to receive $44.9 billion in U.S. aid as part of the recent government spending bill. The U.S. should continue supporting Ukraine until Russian President Vladimir Putin is out of power, King said. He characterized Putin as “a dictator.”

The men, aged 28 and 48, were last seen on 6 January heading to the town of Soledar, where fighting has been especially fierce in recent days. There has been no contact with the pair since they left Kramatorsk at 8am on Friday.

The two missing men have been identified to The Independent as Andrew Bagshaw, 48, and Christopher Parry, 28.

A famous Russian actor is being threatened with criminal charges by Russian authorities after publicly criticising the war in Ukraine.

The search for Artur Smolyaninov, a prominent film and theatre actor, was announced by Russia’s top investigative on Monday in tandem with a second probe against a philanthropist who supports the Russian opposition.

In a statement, Russia’s Investigative Committee said that its chief Alexander Bastrykin ordered the launch of a criminal case against Mr Smolyaninov, who fled the country after Moscow’s forces invaded Ukraine.

US could send Stryker combat vehicles to Ukraine – report

The Pentagon is looking to send Stryker armoured combat vehicles to Ukraine in the upcoming tranche of assistance, reported Politico.

A defence department official aware of the internal deliberations said that the Strykers — an eight-wheeled armoured fighting vehicle built by General Dynamics Land Systems — can be part of the next batch of military aid being shared with Ukraine, the report added.

Another US military staple, the Strykers can operate in snow, mud and sand but has limited off-road mobility due to lack of tracks.

Russian authorities on Monday announced parallel criminal probes against a famous actor critical of the war in Ukraine and a philanthropist who supports the Russian opposition, the latest in a months-long, sweeping crackdown on dissent.

Russia’s Investigative Committee said in a statement that its chief Alexander Bastrykin ordered the launch of a criminal case against Artur Smolyaninov, a prominent Russian film and theater actor who left the country after Moscow’s forces invaded Ukraine and repeatedly spoke out against the war.

According to the statement, Smolyaninov “made a series of statements directed against Russia in an interview to a Western media outlet.” The Investigative Committee didn’t clarify which of Smolyaninov’s actions constituted a criminal offense and what charges it would bring against him.

Russia is preparing fresh troops for a renewed major attack on Ukraine and likely the capital Kyiv, the Ukrainian officials, led by the commander in chief General Valery Zaluzhniy, have warned.

Anticipating a bigger military offensive, Volodymyr Zelensky appears to be relying on securing more and sophisticated weapons from Ukraine’s western allies to repel these attacks and inflict damage on Russian forces.

Mr Zelensky rallied another round of diplomatic efforts with European ally and Czech Republic’s president Petr Fiala who also serves as current chair of the 27-member European Union.

“I am certain that our soldiers at the front will get these weapons and equipment. Very soon,” Mr Zelensky said.

Ukraine is already getting Patriot anti-missile defence systems and Bradley Fighting Vehicles from the US in a major arsenal boost, along with lightweight tanks from France in a reluctant assistance as Emmanual Macron insists on not getting into a direct conflict with his Russian counterpart Vladimir Putin.

Volodymyr Zelensky has said there is no life and no whole wall left in Soledar where Russia has allegedly concentrated their military might now in the 11th month of war.

“Bakhmut and Soledar, Kreminna and Svatove, overall prospects in Donbas for the coming weeks. The battle for Donbas continues. And although the invaders have now concentrated their greatest efforts on Soledar, the result of this difficult and long battle will be the liberation of our entire Donbas,” Mr Zelensky said in his nightly address.

He said that Ukrainian fighters in Soledar are withstanding new and even tougher attacks from the Russian soldiers.

“It is extremely difficult – there are almost no whole walls left… Due to the resilience of our warriors there, in Soledar, we have gained additional time and additional power for Ukraine,” he said without sharing more details.

“And what did Russia want to gain there? Everything is completely destroyed, there is almost no life left. And thousands of their people were lost: the whole land near Soledar is covered with the corpses of the occupiers and scars from the strikes. This is what madness looks like,” Mr Zelensky said.

The men, aged 28 and 48, were last seen on 6 January heading to the town of Soledar, where fighting has been especially fierce in recent days. There has been no contact with the pair since they left Kramatorsk for Soledar at 8am on Friday.

The two missing men have been identified to The Independent as Andrew Bagshaw, 48, and Christopher Parry, 28. Mr Bagshaw was born in the UK, but now resides in Christchurch, New Zealand.

A Ukrainian friend and former flatmate of Mr Parry in east Ukraine said that the pair received a call to help evacuate civilians on Friday.

The route they are supposed to take, which The Independent has seen, skirts the edge of the town close to Russian positions and may have actually entered areas engulfed by a moving frontline, as Moscow launched a major assault.

Russian soldiers are stepping over the dead bodies of soldiers from their own unit in the war in eastern Ukraine as heavy fighting plagues the region, especially in Soledar and Bakhmut.

Ukrainian military analyst Oleh Zhdanov also called the fighting in Bahkmut and Soledar as “the most intense on the entire frontline”, with little progress by either side in the freezing conditions.

“So many (pro-Russian fighters) remain on the battlefield … either dead or wounded,” he said.

How has war changed love and relationships in Ukraine?