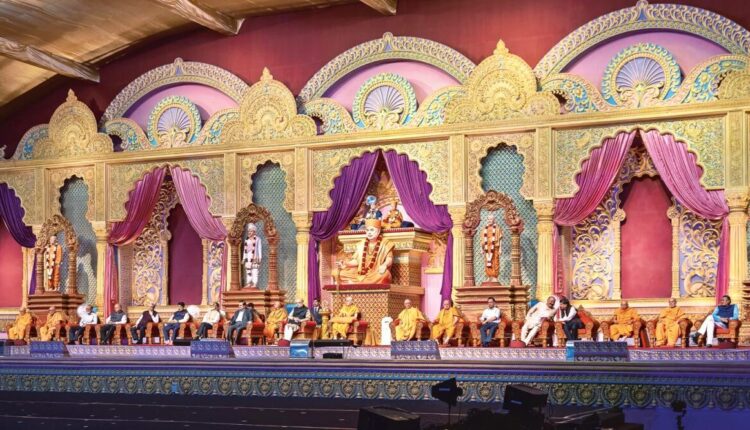 BAPS hailed for evacuation of students from Ukraine

Union ministers Hardeep Singh Puri and V K Singh on Sunday appreciated the assistance provided by volunteers of Swaminarayan sect in bringing around 23,000 Indian students from the conflict zone of Ukraine during Russian invasion in that country.

The two ministers were speaking at the month-long Pramukh Swami Maharaj Shatabdi Mahotsav organised by Bochasanwasi Shri Akshar Purushottam Swaminarayan Sanstha (BAPS) to celebrate centenary of Pramukh Swami on the outskirts of Ahmedabad.

The ministers were at the event based on the theme of “BAPS – UK-Europe Day”. Puri and Singh were part of a team sent by the Indian government to Europe to facilitate evacuation of the Indian nationals stuck in Ukraine.

Puri, Minister for Petroleum and Natural Gas, Housing and Urban Affairs, said, “I was… privileged to work with the Swaminarayan sanstha when the Prime Minister (Narendra Modi) sent my friend and colleague VK Singh and me along with two others to help and facilitate the evacuation of 23,000 Indian students who were struck in Ukraine following the military action there.”

“The manner in which the volunteers from the Sanstha and their associates set up mobile field kitchens in the south eastern Polish city of Rislov and in other parts… Feeding around 1,000 hot vegetarian meals daily to refugees of all faiths and nationalities touched the hearts of all those who received that humanitarian assistance…,” he added.

Minister of State for Road Transport, Highways and Civil Aviation, Singh, hailed the humanitarian works being done by the volunteers of BAPS during any difficult situation.

“I had gone to Poland. We just had a small embassy. Very few people were there. And then our Prime Minister spoke to Mahant Swami (the current religious head of BAPS)… when he (Mahant Swami) spread the word in other countries… it is difficult to explain as to how fast we started getting assistance… You people came as volunteer from the UK, other European countries,” said Singh.

“The way you people came, ran kitchens, served people, organised them so that we could send them back (to India), it was not possible for anyone else. And therefore, I bow to you all, the Sanstha and volunteers,” he added.

The Elvis Presley Buildings that are Left in Las Vegas