While Hurricane Fiona knocked out water and electricity to her home, the owner of Ava Uniforms-La casa del Bordado (asi/344361) in Bayamón, Puerto Rico, is doing everything she can to keep business moving.

“I have due dates with clients that I have to meet,” says Vascos, who’s had to wash dishes in her pool due to lack of running water. “I can’t let them down.”

Vascos is one of the many promo products/apparel decorating professionals in Puerto Rico who are contending with difficult personal and professional fallout from Fiona, which brought punishing winds and more than two feet of rain to the island, triggering floods and cutting power and water service after making landfall Sunday, Sept. 18.

As of mid-week, over 1 million people in Puerto Rico were still without power. More than 450,000 folks had no water service or only intermittent service.

Given the humanitarian situation and uncertainty about just when normalcy will return, new business has largely ground to a halt for Vascos and others she knows in the promo/decorating market.

Hurricane Fiona has officially hit Puerto Rico and the entire island is currently without electricity, according to NPRpic.twitter.com/hxQl07CRCu

“Business is horrible,” Vascos shares candidly. “The phone doesn’t ring. People are not coming in. Businesses in our industry and others aren’t opening because there’s no power and water. Some [promo] businesses I’ve talked to are opening only to 1 p.m. and running on a generator, but they can’t charge by credit card for any work they’re doing because they don’t have internet.”

Earlier this week, Vascos had to operate her business on a generator, too. That was expensive, costing about $100 in fuel for one-and-a-half days. Due to power constraints, her company couldn’t use its large automatic screenprint press, but was still able to do embroidery.

For Vascos, the situation improved dramatically when power and water returned to her business (though not her home) by Wednesday, Sept. 21. “We were very blessed,” she says, noting that she set up a bed at the facility due to the building having electricity. 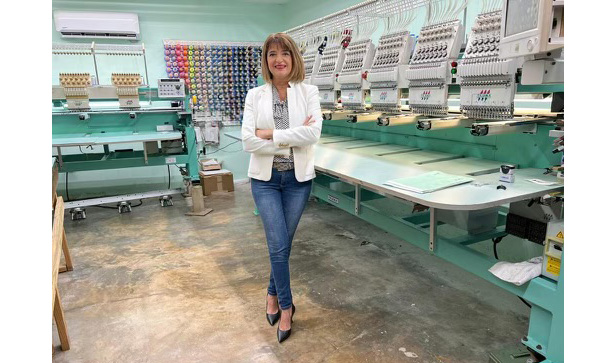 Having power and water helped the firm to get to work on pre-storm orders for an upcoming concert and a cancer awareness/fundraiser event. Vascos has also been hustling to get more business moving through her pipeline, but it’s proven a tough challenge in the aftermath of Fiona.

There have been other complications, too. About 80% of Vascos’ business is with corporate clients and one of her biggest customers, a company that provides valet parking services across Puerto Rico, has postponed orders that had looked a sure thing. “They’re waiting to give me a couple orders until things come back to normal,” Vascos shares.

Still, she’s remained proactive and managed to get a large order for sublimated T-shirts. The issue there, though, is that she contracts out sublimation work. Normally, her Puerto Rico-based sublimation contractor is quick to produce, but he’s without power and can’t commit to a deadline. Vascos could outsource the work to the United States mainland, but that would come at a considerable cost to margins on her already-quoted order. “You have to pay the freight,” she says.

Hurricane Fiona dumped more than two feet of rain in some areas of Puerto Rico. The floodwaters have receded in most neighborhoods, leaving many weary residents to begin clean-up efforts.https://t.co/jOHK0gF8Bi

If there’s any silver lining, says Vascos, it’s that it appears the impacts from Fiona will not be on the level of Hurricane Maria. That 2017 storm knocked out power for months in Puerto Rico and killed thousands. ASI Media reported on the promo-specific impacts of Maria. So far, Fiona is responsible for at least five deaths throughout the Caribbean.

“With Maria, it was six to eight months before my business returned to normal,” shares Vascos. “For four months we had no power. I had to subcontract everything out to a partner in Miami and then fly everything here. With Fiona, the recovery should be quicker. Hopefully the longest is two weeks.”

The Federal Emergency Management Agency (FEMA) is already contacting businesses about loss recovery and the like, Vascos says. (Puerto Rico is an unincorporated territory of the United States.) She also notes that businesses on the island will learn lessons from Fiona that will help them be even better prepared for future storms. “After Maria, we got generators,” she says. “After this storm and the water issues, I’m going to install water tanks.”

While born in Miami, FL, Vascos was raised in Puerto Rico. It’s her home. And despite the powerful storms and their related disruption, she has no plans of leaving.

“Puerto Rico is a paradise,” she says. “I love living here. My business has done well. I have a strong list of clients. The Puerto Rican people – we are resilient. We’ve learned to live with mother nature, and we work around the disasters.”

Get the most important news each day by subscribing to PromoGram.